BlackRock are a New York based global investment management corporation with 70 offices in 30 countries (3 in Australia), and clients in over 100 countries. They are the world’s largest “shadow bank”, a phrase used to describe companies that offer the same services as banks, but without banking regulations. BlackRock are proud of their “risk-based strategy” based on diversification within multi-asset portfolios.

“Because it has over $6 trillion of client money to invest, much of it in products that follow stock and bond market indexes, BlackRock is among the top owners of nearly every public company.”

BlackRock invests in some of the planet’s worst companies and has a vast array of technology to keep them updated about their multitude of investments. This includes the Aladdin system with a capacity of about 5,000 mainframe computers which can scour and analyze "global economic data, stock quotes and a range of other variables, including even changes of government, earthquakes, cold spells and droughts."

Aladdin also keeps track of approximately 30,000 investment portfolios, not just owned by the firm, but portfolios owned by banks, pension funds and insurance companies. "According to the British business magazine ‘The Economist’, the system monitors around 7 percent of the world's total invested capital of approximately $225 trillion.”

Being the largest shareholder in BHP and Newcrest provides BlackRock with significant influencing potential, but for strategic influence, BlackRock appears to play another tactic:

"Some of the largest investment managers—such as BlackRock—advocate simply owning every company, reducing the incentive to influence management teams. A reason for this last strategy is that the investment manager prefers a closer, more open and honest relationship with a company's management team than would exist if they exercised control; allowing them to make a better investment decision…”²
BlackRock and Australian mining companies in Ecuador

BlackRock Investment Management (UK) are also a top ten shareholder of DGR Global controlling about 6% of that company and 5% of DRG’s subsidiary Solgold which BlackRock amassed in April 2018.

•BHP has a raft of exploration licences in the north-west of the country, 40km south-west of Solgold’s Cascabel exploration area. BHP have recently opened an office in Ecuador.

•DGR Subsidiary (Solgold): extensive exploration areas, most notably in the north of the country with the Cascabel project.

In May 2017, Lundin Gold Inc secured a project finance package of US$400-450 million with the Orion Mine Finance Group and Blackstone Tactical Opportunities to provide the foundation to develop Fruta del Norte gold mine. The package comprised “a gold prepay credit facility for $150 million, a stream loan credit facility of $150 million and committed participation of $100 to $150 million to future equity financings required to fund the project.”

Without the May 2017 finance package, Fruta del Norte may not have proceeded. BlackRock therefore were the vital element in financing this controversial development, meaning that BlackRock are “up to their necks” in Fruta del Norte. 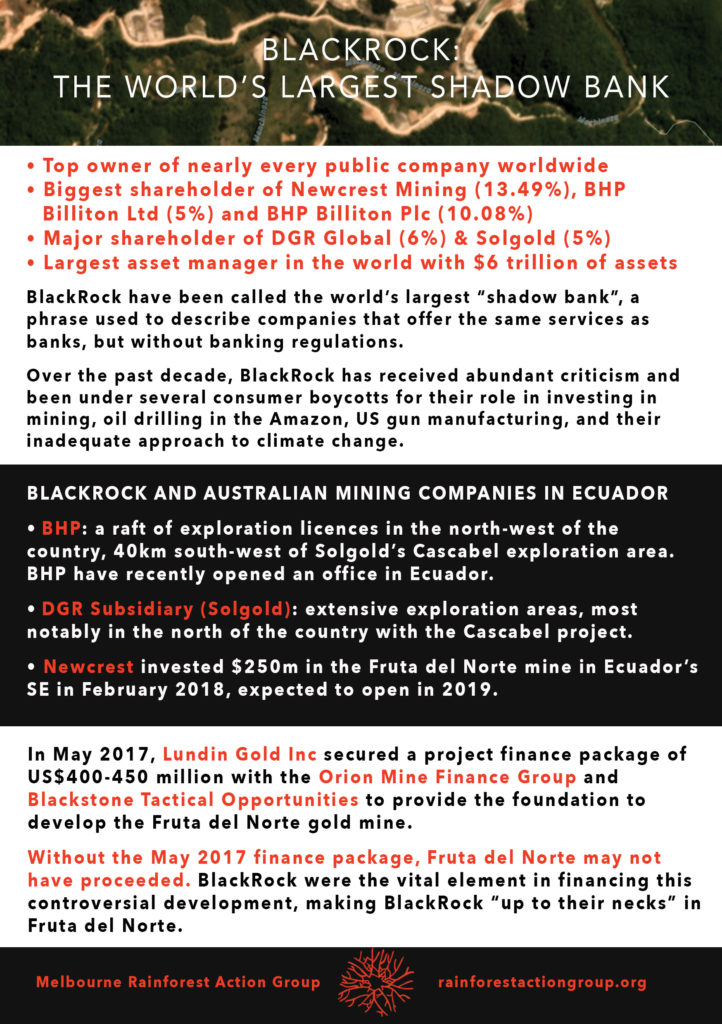 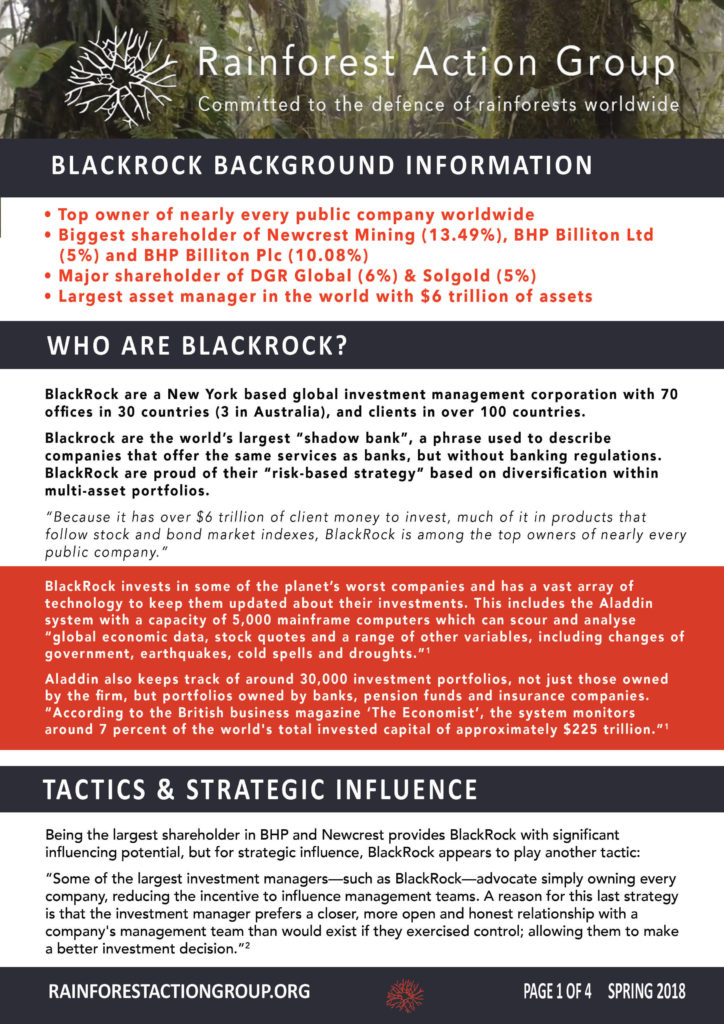 Detailed information on BlackRock and their global operations
(4 page PDF)