200 protestors at the head office at BHP today blocked entries to doors this morning amid demands for BHP to take greater accountability of its mining operations globally.

The protest comes as Ecuador goes into a state of emergency with hundreds injured and at least 5 killed in one of the most serious uprisings Ecuador has seen in recent years. The unrest arose from resistance to IMF-mandated austerity measures that also allow greater freedom for foreign interests operating in the country, making mining companies such as BHP complicit in the use of military force to protect their business interests.

"Protesters were informed about recent uprisings in Ecuador at the rally. Many were shocked to hear about the violence being perpetrated on the Ecuadorean people by the state. Many in the crowd were also shocked about the extent of mining interests in Ecuador by Australian companies. Of particular concern was the activities of BHP in the Intag Valley and their investments in SolGold," Melbourne Rainforest Action Group member, Anthony Amis.

The blockade was targeted as a “dress rehearsal” to a week of blockades planned at the International Mining and Resources Conference (IMARC) from 28 October.

Members from a number of groups including the ExtinctionRebellion, Lasnet Solidarity, Blockade IMARC, and the Melbourne Rainforest Action Group joined the demonstration.

BHP has seven concessions in Ecuador – many of these on Protected Forests and Indigenous territories, as well a Joint Venture in Indigenous territory Tarquí which has been hotly contested. In June, a provincial court in Imbabura revoked the environmental license for ENAMI/Cornerstone and BHP to conduct explorations on their concessions in these areas, barring them entry, however BHP employees continue to illegally conduct exploration in these areas.

The current uprising in Ecuador is led by Indigenous organisation CONAIE which denounced the government and corporate interests in a statement today, saying:

“The business class, who has sold the country and is pro-imperialist, wants to secure the funds from the IMF for their own debt, their crisis. We the working classes, Indigenous peoples and the popular sectors, are paying [for their crisis]. This struggle isn’t for today, nor is it only for the price of gasoline. It is to prevent them from auctioning off our future. What we are unsuccessful of stopping today, two or three generations of us will be forced to pay with hunger and poverty.”

To our bases and the Ecuadorian Peoples

(Quito, October 10, 2019) We have seen days filled with agitation. We have been surprised by our own capacity to fight and resist, and we have demonstrated to the world that the Indigenous movement and the Ecuadorian peoples are one single force, and, from the place that history has granted us, we have made the power tremble. We have stated our position: this does not end until the IMF leaves Ecuador.

Like all governments who have been debilitated and delegitimized, the only response that Lenin Moreno has given is violence and repression. [the government] Has treated the people as its enemy, without a shred of respect to the simplest norms of respect for human rights. They did not respect the zones of humanitarian protection, instead throwing tear gas bombs towards our children and our elders. They prevented us from creating humanitarian pathways so that the injured could reach hospitals. And, they have massacred our fallen brothers with bullets to their bodies, impacts of gas cannisters, collisions by horses, being beaten and even thrown off of a bridge.  What we are living in this country does not have a name, there is no memory of such atrocious and violent repression in recent history against a people who are reclaiming their rights.

For those who sustain this government so that they feel empowered to throw themselves in a war against the people: the same who are protecting them in Guayaquil. The business class, who has sold the country and is pro-imperialist, who wants to secure the funds from the IMF for their own debt, their crisis. We the working classes, Indigenous peoples and the popular sectors, are paying [for their crisis].

This struggle isn’t for today, nor is it only for the price of gasoline. It is to prevent them from auctioning off our future. What we are unsuccessful of stopping today, two or three generations of us will be forced to pay with hunger and poverty.

We have tears of rage but we have learned from our mothers and fathers that those who die in battle are honoured by multiplying them. The dialogue that Lenin Moreno is proposing is a farce. This is why, comrades, we will radicalize our actions. There is no dialogue with this assassin government unless the minimum requirements are met: the exit of Maria Paula Romo and Oswaldo Jarrin from the government and the abolition of Decree 883.

Until then, our homework is to struggle., to rejuvenate our strength and sustain the road blockades and the take-overs of the departmental offices and public buildings, to hold assemblies in all of the communities and to build alliances with all of the sectors of the people.

No one will take the words of the Indigenous movement to speak with this assassin government until these demands are met. The only official voice is the leadership of the CONAIE. It has been said, leaders who do not comply with the mandate of the people will be subjected to popular and indigenous justice.

Not one step back!

IMF Out of Ecuador!

This Strike does not End!

For the council of the government 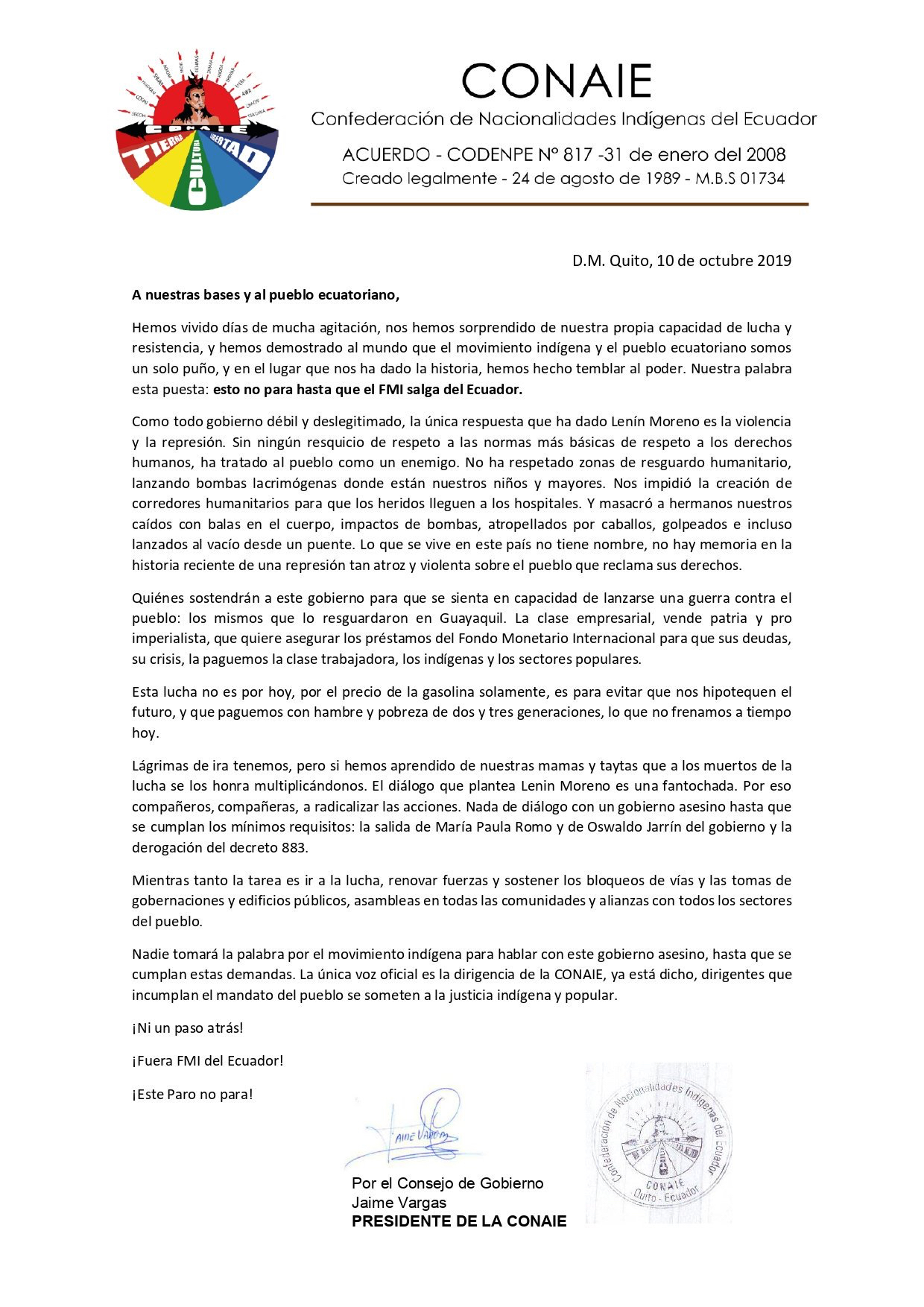