A DIRTY JOB FOR THE PRICE OF GOLD

They have ruined my tranquility, damaged my farm and I am still living in poverty."

The risk of an epidemic in the mountain known as El Lomón, El Triunfo community, Buenos Aires parish, Urcuquí canton, is high. The lives of the miners are essentially held by a thread, not dissimilar to that formed by the tiny splinters of gold that appear in the test basket, before merchants pay $US20 for a sack of the material. 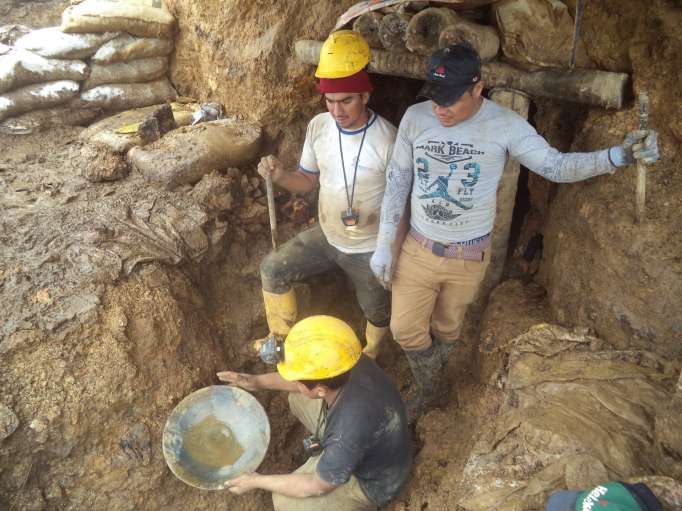 Since December last year, groups of three, five or ten men, with or without experience, have been arriving in this territory. Their dialect identifies to which region of the country they belong. They declare themselves as good people and assure me that faith moves them to help them reach this mountain about 2,300 meters above sea level.

"Our life is more important than the mine, so we take care of ourselves and try to avoid selfishness, envy and greed for gold that could cause acts of violence," said one of the "inhabitants" of this new town formed of plastic tents.

Those with the most expertise in mining are from Portovelo, Zaruma (El Oro). They have used from a tradition of artisanal mining, long before the Spaniards arrived at the Yellow River in 1549.

The adverse conditions on the site end any illusions with the same promptness with which they arrive. Some families who arrive with their young children leave that afternoon or the next day. 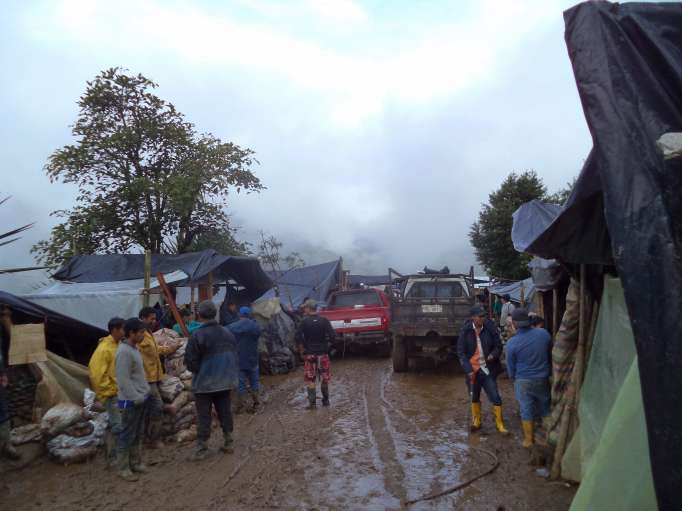 The fatigue from the trip, the cold nights in Buenos Aires (Urcuquí), the scarcity of food, the discomfort of sleeping in spaces that previously served as hallways, corridors and rustic rooms that have been abandoned, shapes the character in ways it did not previously.

Professionals, transporters or merchants who came to the province previously paid $10-$15 per month for a room. With the discovery of the gold mine, the costs have increased to $5 -10 dollars for 24 hours.

The chatter of strange visitors outside on the street corners and in tents does not stop all the night. On the other side of a wall built from adobe or wooden planks, insomnia overcomes fatigue. I get up from the floor that served as bed and start walking the streets. I stop a few minutes to listen to the endless conversations that reflect the economic situation. It is at least, novel to hear the simple man of the town discussing his mode of investments, profits, losses, transportation, food, tools, the price of gold, the situation of his family, as well as the convenience of continuing on or saying goodbye forever. 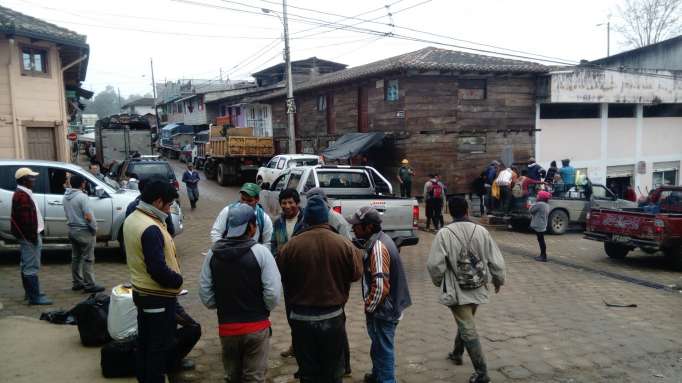 As soon as dawn begins, and before undertaking their pilgrimage, miners must pay the owner of the house the agreed value. They hurry out to the small square surrounded by improvised tents that house products for sale. A column of four-wheel-drive trucks, mostly new, also occupies the small streets of the parish.

Rubber boots, a water poncho, a pick, a shovel, a lever, a bar, a sledgehammer, an iron point, a kitchenette, gallons of fuel and a sack of provisions, are part of the equipment that allows these miners to survive in unknown territory.

The driver's scream alerts travellers, as they fill the double cabin and the tray with 15 passengers. The miners leave the town and take a road fraught with adverse conditions. In an hour and a half of travel, avoiding narrow stretches, quagmires, gorges and bridges, the truck arrives at the last stop.

"We're here!" warns the assistant. Immediately a man of unwavering stubbornness approaches: "To pass sir, you have to pay a toll of $2 and if you want to return with cargo, you must wait in turn with 40 vans," he warns. The driver pays without problem: "Right now there is enough for everyone," he says smiling. His daily profit is up to $200. The majority return with loads of 40 60-pound sacks. The cost of passage is $2 dollars per sack, plus passengers. The persistent rain, the slippery path, dangers, are nothing in the face of gain. 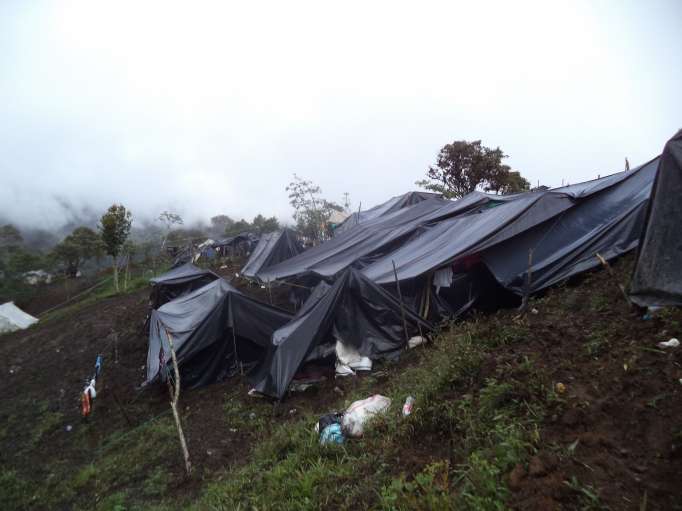 Market on the hill

Already hemmed in by mountains, in an open field are about 200 structures made from black plastic secured onto a frame of timber in the shape of an archaic house. A quagmire of mud covers the street where the dealers of one of the most expensive metals in the world - gold - stroll.

It is common to see hands carrying wads of $100 bills that seduce small miners. On either side of the street are thousands of jute sacks filled with rocks or 'betas', as they call the material, from which four or five grams of gold are extracted after processing. When bargaining with a show of cautious words, I notice that in this place there is no trust, everything is is calculated and paid for in cash. 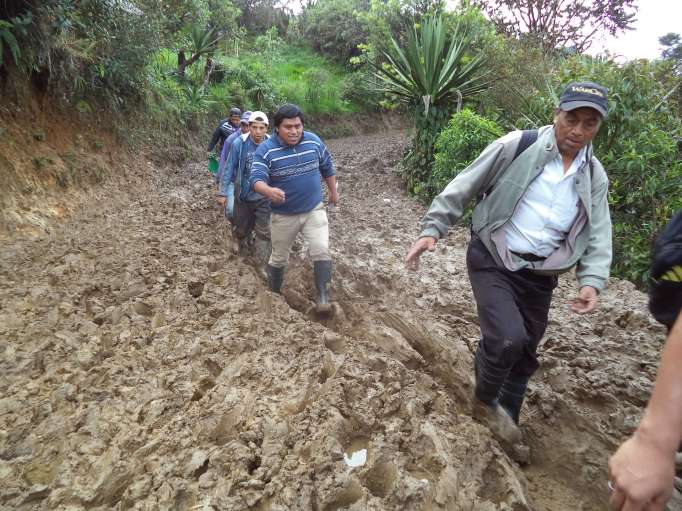 Pilgrimage to the mountain

People buying in for the first time have to work out how to find the destination. Nobody is willing to waste time to go into details. With an initial greeting they say: "Look at the end, there are miners digging the holes. You have to walk two or three hours."

The first stretch of the trial extends for about two kilometers of muddy road, and shows the toughness, dexterity and strength needed to walk one step after the other. The strength of one person is not enough to recover boots soaked in mud. The help of other pilgrims also starts the beginning of dialogue and respect between unknown Ecuadorians.

Clambering up a second knoll converted into another transfer post where hundreds of workers have erected 150 black plastic tents, takes you to prison camps with prisoners doing forced labor. In this royal scene, the heroes are the carriers who, with dirty clothes and injured shoulders, carrying hundreds of sacks from one pulley to another.

As organized as forest ants, they barely have time to raise their heads and answer: "Before, between December and January, we earned up to four dollars per sack; today we do the same job for one dollar. There are plenty of people here who pray for this hard work." 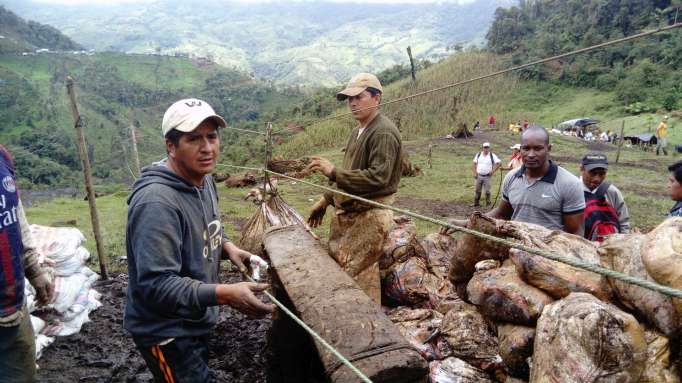 "So that no one takes away our holes, someone from our group has to sleep in the worst conditions."

On each pulley there is a command post controlled by hardy, suspicious, distrustful people who watch out the corner of their eyes. They believe that police or military intelligence agents have infiltrated amidst the strangers. "We are careful in giving information, pictures, photographs or videos. We know that they are investigating, because we recognize that it is illegal work, but they must understand that nature has given work to 6,000 people, behind each of whom is a family. President Moreno offered 300,000 jobs per year, but 10 months into his term, unemployment is equal to or worse than before," says a miner as he places the material on the pulley.

The raw gold material that is moved night and day, in about 70 pulleys, winches or cables; the black plastic tents that house the sacks; food businesses in which a rice with chicken costs $3-4 dollars, depending on the cut desired by the client, are all part of this ghost town that survives on greed, amid selfishness and ambitions.

"There is no law here, only God for those who believe. The strength of stupid or good people is regulated by the need to live together," says a mulatto from Tumaco. 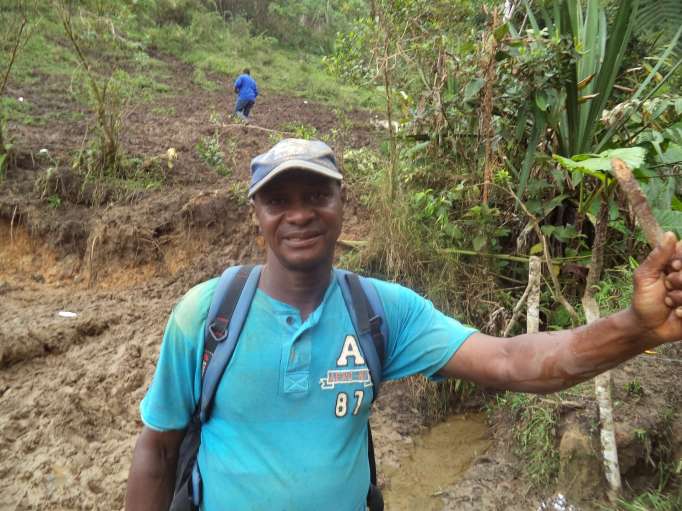 The voices that warn

The testimony of those who prefer not to identify themselves confirms that this is a parish with high rates of poverty and unmet needs. They profess an end of conflict with the institutions responsible for security and public order who would act after a situational review.

"We lived on milk products, cheese, naranjilla and tree tomato, products that intermediaries bought at low prices. To have an idea: a large cheese was worth 1.50 and a liter of milk 0.25 cents, at farm level," he says.

There is no signal from the telephone operators. To communicate with their families, miners must queue at one of the few booths that provide this service at the parish head. 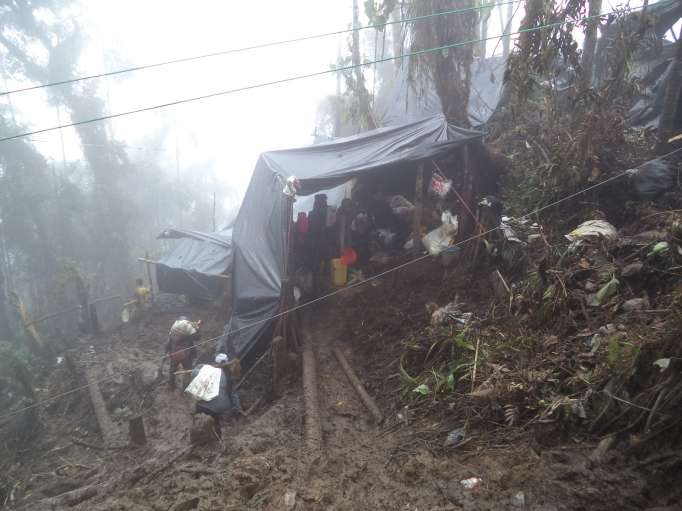 The mountain El Lomón is losing its quietness, the aroma of the native trees of guayacán, chonta ... the small springs of pure water, the delicate and natural trill of the birds, the oxygen accumulated for millions of years. The contamination has already started. They do not have septic tanks, people do their business in the middle of the native plants. The aroma of the wild trees is disappearing. In only two months, one smells the stink at a safe distance. This is a health issue that no one knows how to remedy.

The invasion came at an unexpected time. "Before Christmas I went to the village. At the end of the week when I returned hundreds of people had broken the fence of some 60 hectares of cattle pastures. There were so many that I could hardly complain. They told me they were going to pay, but only some have given me 50 cents when it occurred to them, " said Primitivo Andrade, a 75-year-old man whose face and clothes reflects his poverty. 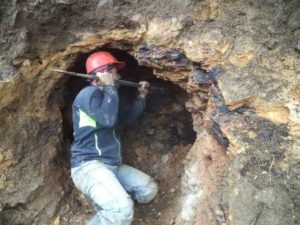 The first day they discovered the mines, the miners knocked down dozens of trees with chainsaws, axes and machetes, and created an opening about two kilometers across to enter the mines.

Groups of five to ten men erected their plastic tents in the same place as the excavations, from where they extract the rocks with splinters of gold. At only three meters deep they found the 'betas'. That day, cries of overflowing happiness were heard that shook the mountain.

Since then, thousands of people, including businessmen, carriers, sellers, merchants, businessmen, among others, arrived in that corner of Urcuquí.

Those from Portovelo and Zaruma are more numberous and have the most experience. They help guide others whose ambition for gold has made them reckless. With a bar, sledgehammer, an iron point and a lever, they make holes wherever they want, without the slightest precaution to avoid a landslide that could bury everyone.

The miners say in the beginning shippers earned up to $800 per week to move the material 100 meters from the mine to where pulleys of air transport were placed. A pack of cigarettes cost between $4-5 until competition came and now prices have gone down, according to a Venezuelan migrant who walks among the trees accompanied by a nice and slender woman.

In the air you can see about 80 cables that carry the sacks of rock to the market. The route is about five kilometers by air. The freight is $11-12 dollars per package. A sack in the mine costs $20, and when it leaves Buenos Aires it is calculated at $38 dollars.

The noise of the small engines that drag the pulleys back and forth starts at dawn and sometimes stops at 2am , for a few hours.

The gold material is transported in trucks to Zamora Chinchipe, Zaruma and Portovelo for refinement with appropriate machinery. 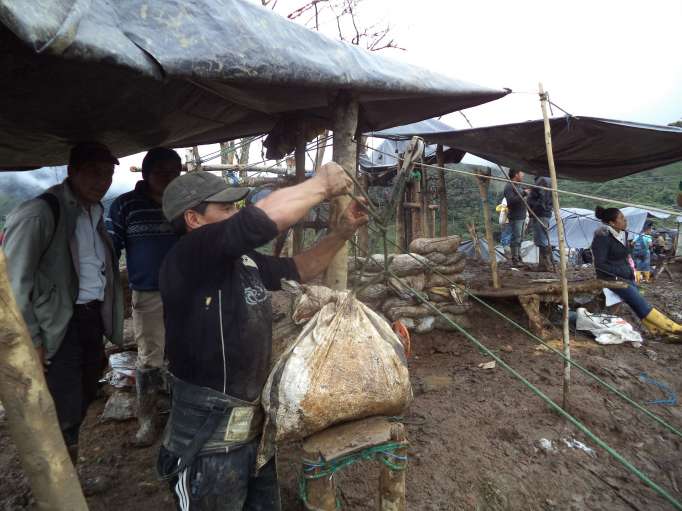 The State signed an exploration and exploitation agreement with the Australian international company Hancock Prospecting. "They have committed an important investment." The costs are not known, nor the amount of gold that exists, the profits the parties will gain, and what is also important: the repair of the rights of nature and pollution. 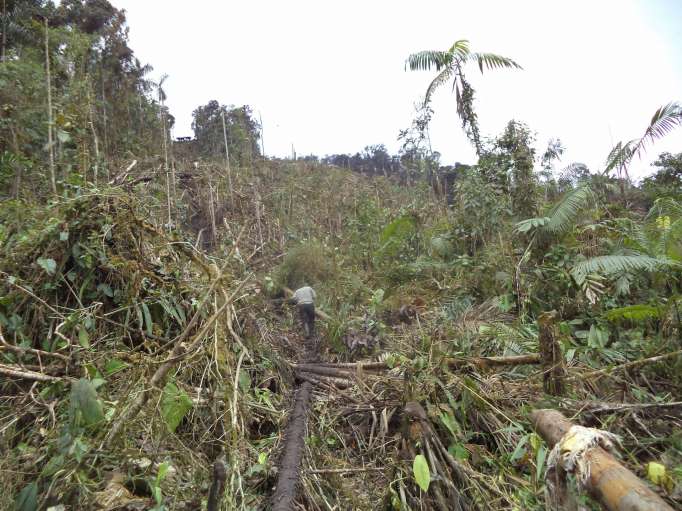 In the last year, more than 45 miners have been arrested including merchants, intermediaries, drivers, workers and up to three soldiers who were carrying around 250 sacks of gold material in an armored truck.

The cases are in the Prosecutor's Office and in the courts. So far, only one person has been sentenced, the rest of the trials remain to be heard. Meanwhile, the miners ask the government to help them by legalising the mines for Ecuadorian families who do not have a job.

The invasion, artisanal mining, pollution, trade and transport continue every day. Nobody knows how and where they continue to evade controls to reach the provinces of El Oro, Loja and Zamora, among others.

Legalisation, labor security and health care are, for now, the demands of the Ecuadorian State. 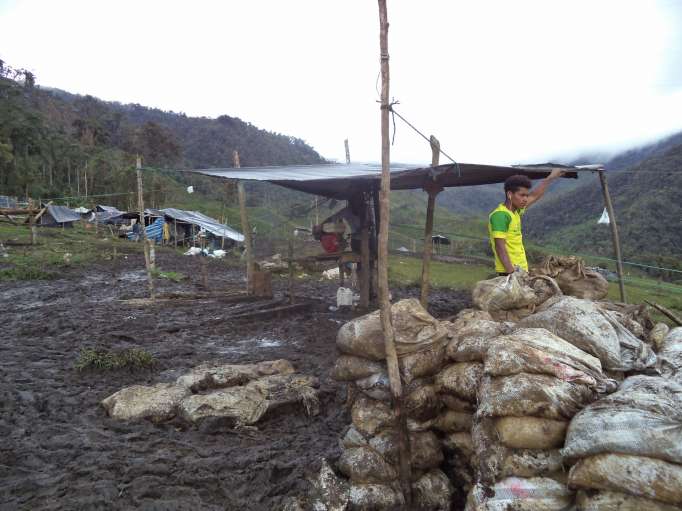