On September 12, members of Intag's local government and organisations sent a letter to the CEOS of BHP, Cornerstone Capital Resources, Codelco and Sunstone Metals, stating that unconsulted mining in their territories was threatening water sources, and demanding they stop explorations in the area.

We, the undersigned representatives of the Autonomous Decentralized Parochial Governments and the principal social organizations of the Intag area, Cotacachi County, Province of lmbabura, send you our most sincere greetings. At the same time, we would like you to listen to the voice of the majority of the population of the Intag area, which has been struggling since January 1995 to prevent the development of metallic mining projects in our territories.

1) Please be aware, CEOs and Ministers, that mining concessions were granted in the Intag area without prior consultation with the potentially affected populations, in flagrant violation of Article 398 of the Constitution of the Republic of Ecuador. In addition to contradicting the Development and Land Use Plans of the decentralized autonomous governments, the mining projects ignore the pronouncement of the Assembly of Unity of Cotacachi County, a space for citizen participation and which has, since 1996, rejected extractivism.

The nearly 90,000 hectares under concession, and being processed, include dozens of communities, productive agricultural lands that supply several cities in Ecuador with food, as well as organic export markets, tourist attractions, 21 micro and sub-watersheds, and includes an important extension of primary and secondary cloud forests. We remind you that the forests of Intag are within the Tropical Andes Biodiversity Hotspot, the most biodiverse of all the Hotspots of global importance. They are home to critically endangered species of mammals, birds, amphibians, fish and trees, including one of the world’s most endangered primates, as well as sheltering and protecting the water of 50 communities. Some species, such as the Longnose Harlequin Frog and the Rocket Frog, have only been reported in the forests of a mining concession and nowhere else in the world.

3) At least 48 water sources that supply the population of rural communities in the Intag area with this vital liquid are located entirely within the mining concessions. In addition, there are more than 200 natural sources of water for human consumption and food sovereignty for local peasant families.

4) Several mining concessions of BHP-Billiton and Cornerstone overlap the Los Cedros, Cebu and El Placer-La Florida Protected Forests, as well as thousands of hectares of forests registered in the Socio Bosque forest conservation program, where mining activities will directly contribute to the degradation of the sites’ biodiversity and worsen the climate crisis.

5) All mining concessions in the Intag Zone, without exception, intersect with the protection zone known as the Buffer Zone of the Cotacachi Cayapas National Park, considered one of the most biologically important on the planet. In the buffer zones, as should be obvious, only sustainable activities that serve as an environmental buffer should be allowed.

6) 100% of the concessioned areas in Intag are within the ACUSMIT, the Intag-Toisan Municipal Conservation and Sustainable Use Area, approved by municipal ordinance in 2019, in whose strict protection and conservation/recovery macrozones no mining activities are allowed. This is not the only municipal ordinance in Cotacachi County that prioritizes conservation and prohibits mining. In 2000, an ordinance was passed declaring Cotacachi an Ecological County. The Ordinance, as well as the ACUSMIT, is still in effect.

7) Intag currently has 38 Community Hydrological Reserves covering some 12,000 hectares of cloud forests and micro-watersheds. All but one of the reserves are located within the mining concessions. Apart from contributing to climate stability and biodiversity conservation, the reserves supply thousands of inhabitants with clean water, and are jealously protected by the communities. Any activity that degrades the vegetation cover is prohibited in the reserves, as is hunting and logging. Mining is expressly prohibited within the reserves.

8) According to a preliminary environmental impact study for a small copper mine in the Llurimagua area prepared by Japanese experts, Intag’s copper deposits are mixed with highly toxic substances. The expert authors of the study predicted the contamination of our rivers with arsenic, lead, cadmium and chromium. Likewise, massive deforestation is predicted, which would lead to the drying of our climate, and the relocation of four communities. Subsequently, they reported the presence of an even larger deposit.

With all this background, we call on you to preserve our right to live in peace and in a healthy environment, rights enshrined in the Constitution of Ecuador, laws and international agreements. We will not allow those business practices that have proven to be sources of conflict in our communities, nor mining activities that cause degradation of our forests, biodiversity and especially our water sources. Therefore, we strongly reject the unconsented presence of mining companies, and, even more so in times of global climate emergency, and we call on national and international bodies to join us in defending the Intag area and in building a future without extractivism. 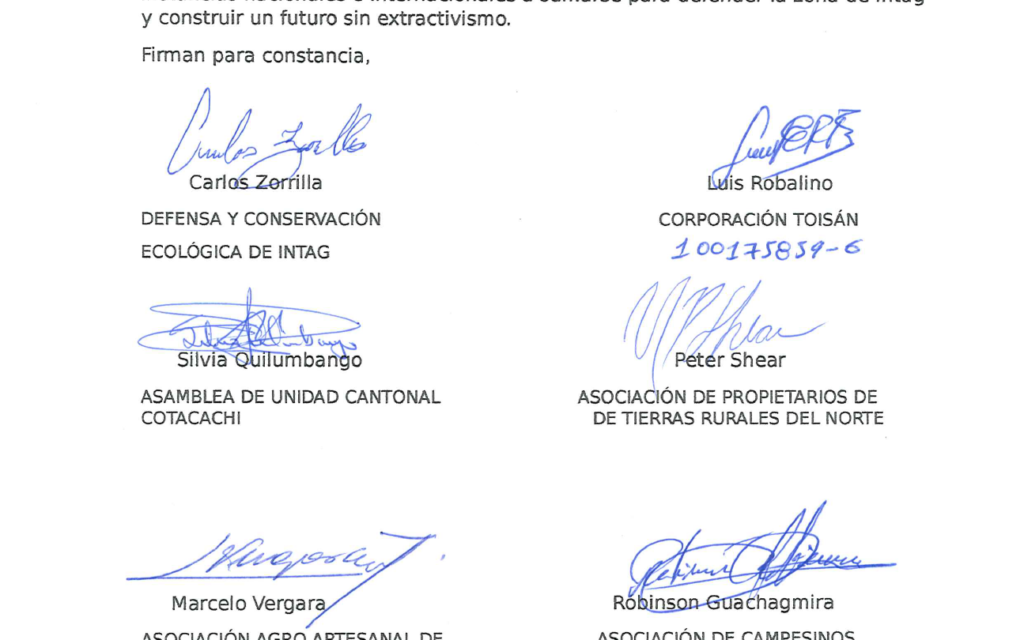 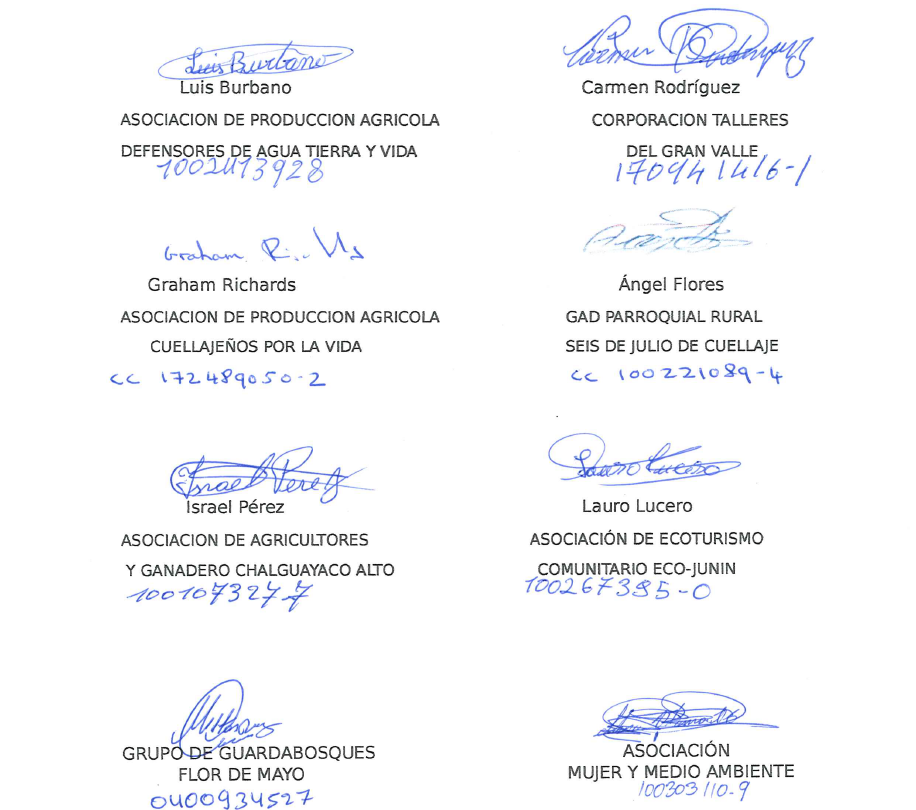 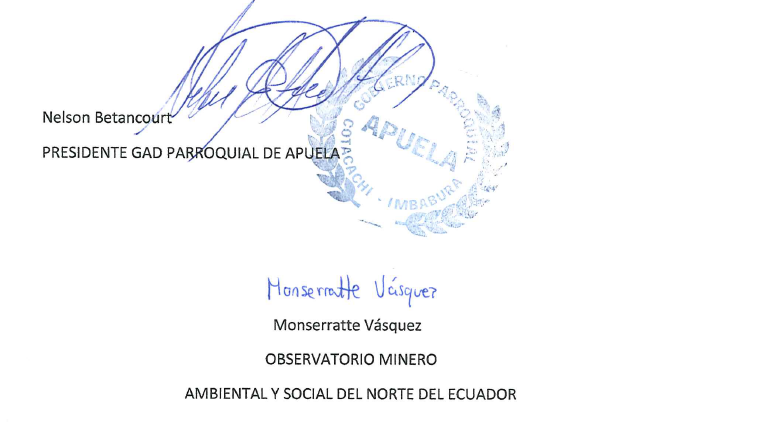 It is worth mentioning that these organizations, unlike the ones that support mining, have never received a penny from the mining companies.