A week of blockades against the International Mining and Resources Conference (IMARC) continued yesterday (Tuesday) at the Melbourne Exhibition and Convention Centre, where more than 500 anti-mining protestors attempted to shut down the conference.

Boon Wurrung Elder Carolyn Briggs welcomed protestors onto her country, and encouraged all to be respectful of the land they walked on. She was joined by Gunnai-Kurnai and Gunditjmara woman Lidia Thorpe. Walpiri elder Uncle Ned Jampijinpa Hargraves and Tjiwarl woman Vicky Abdullah who spoke about their fight against mining companies, along with West Papuan activist Porobibi and a speaker from Chile. Lee Rhiannon from the Greens, Colin Long from the Trades Hall Council and Liz Ross from the Textile Union also spoke in a display of solidarity between First Nations people, trade unionists, activists and environmentalists.

The Ecuadorian Minster of Mining was believed to be one of those barred from entry into the conference. Newcrest Mining Chief Development Officer Mike Nossal was also reported to have had to run the “protest gauntlet”. Newcrest Mining are active in Ecuador at the present time, through their shareholding in Fruta del Norte (FDN) and exploration company SolGold. FDN begins operations this year, despite objections of indigenous people. SolGold’s Cascabel project is also of grave concern to a number of people in the north of the country.

“Australian mining companies have had a key role in the recent political unrest and instability in Ecuador and Chile, among other places, where increased extractivism has not had flow-on jobs or wealth to local communities. In Ecuador, the presence of mining companies is increasingly angering communities who say they were never consulted or gave consent to exploration Rainforest Action Group spokesperson Anthony Amis says.

“Lack of consultation over mining was a major factor in the recent uprising in Ecuador and has been a major flashpoint for indigenous people all over the country” Mr Amis added.

The peaceful blockade was marred by outbursts of police brutality which saw protestors receive a number of injuries including that of a young woman who broke her leg when mounted police drove their horses into the backs of unsuspecting protesters and she went flying. Horses who were used to control the crowd were visibly spooked by the tactic, their wide eyes showing fear and a lack of willingness to trample the protestors.

“We were disappointed to see excessive police force used to control the crowd, particularly when it was done without warning. Protestors were exercising their legitimate rights to demand greater accountability for the actions of mining companies. These mining companies not only emit around 20 per cent of global emissions, but they also are responsible globally for land grabs, military protection of their assets and the pollution of water ways and river systems from mining waste – some of which will never recover,” says Anthony Amis.

The Rainforest Action Group was one of about 23 affinity groups who joined Blockade IMARC to draw attention to the mass destruction caused by extractive industries across the globe and the harm they cause to communities and ecosystems. 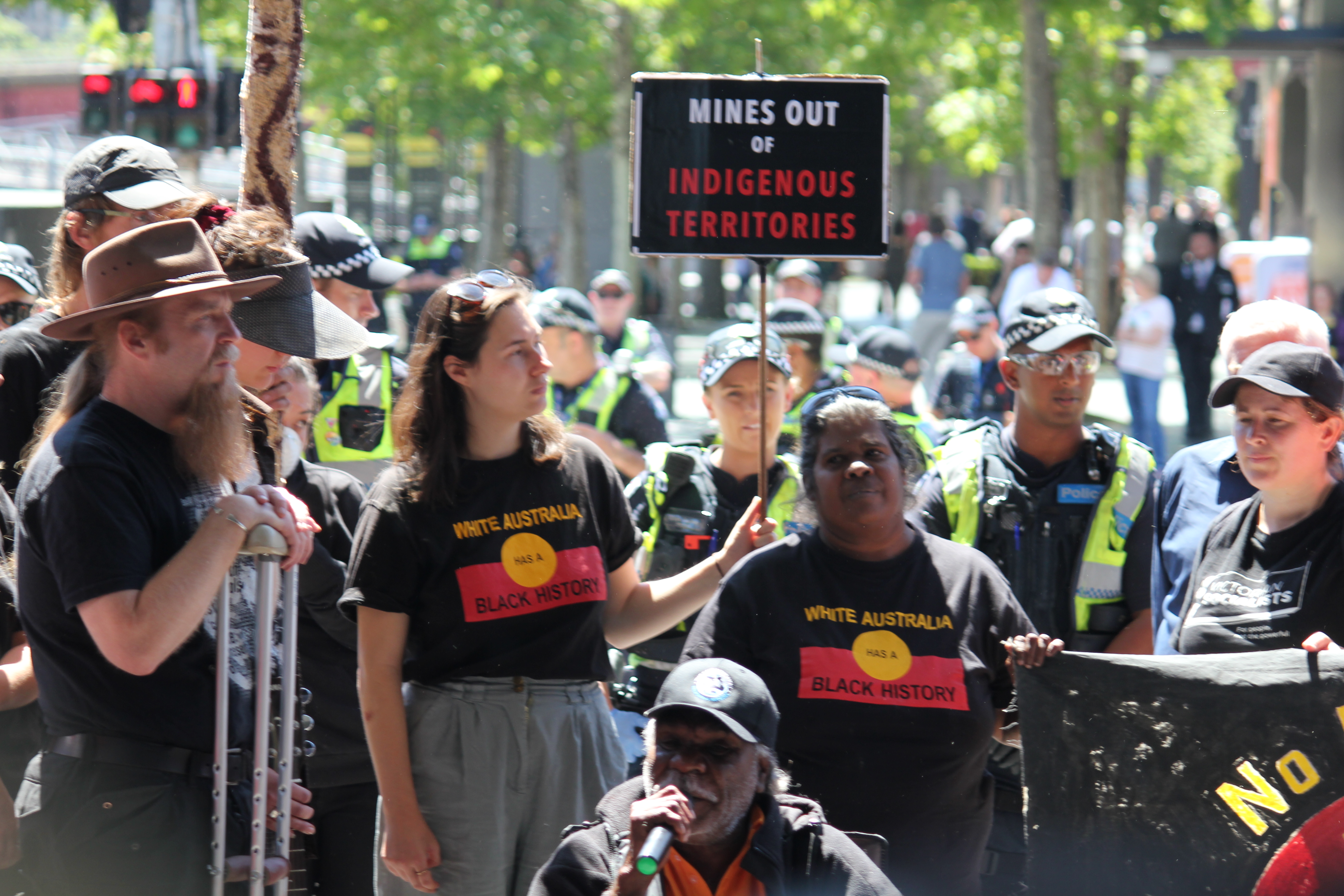 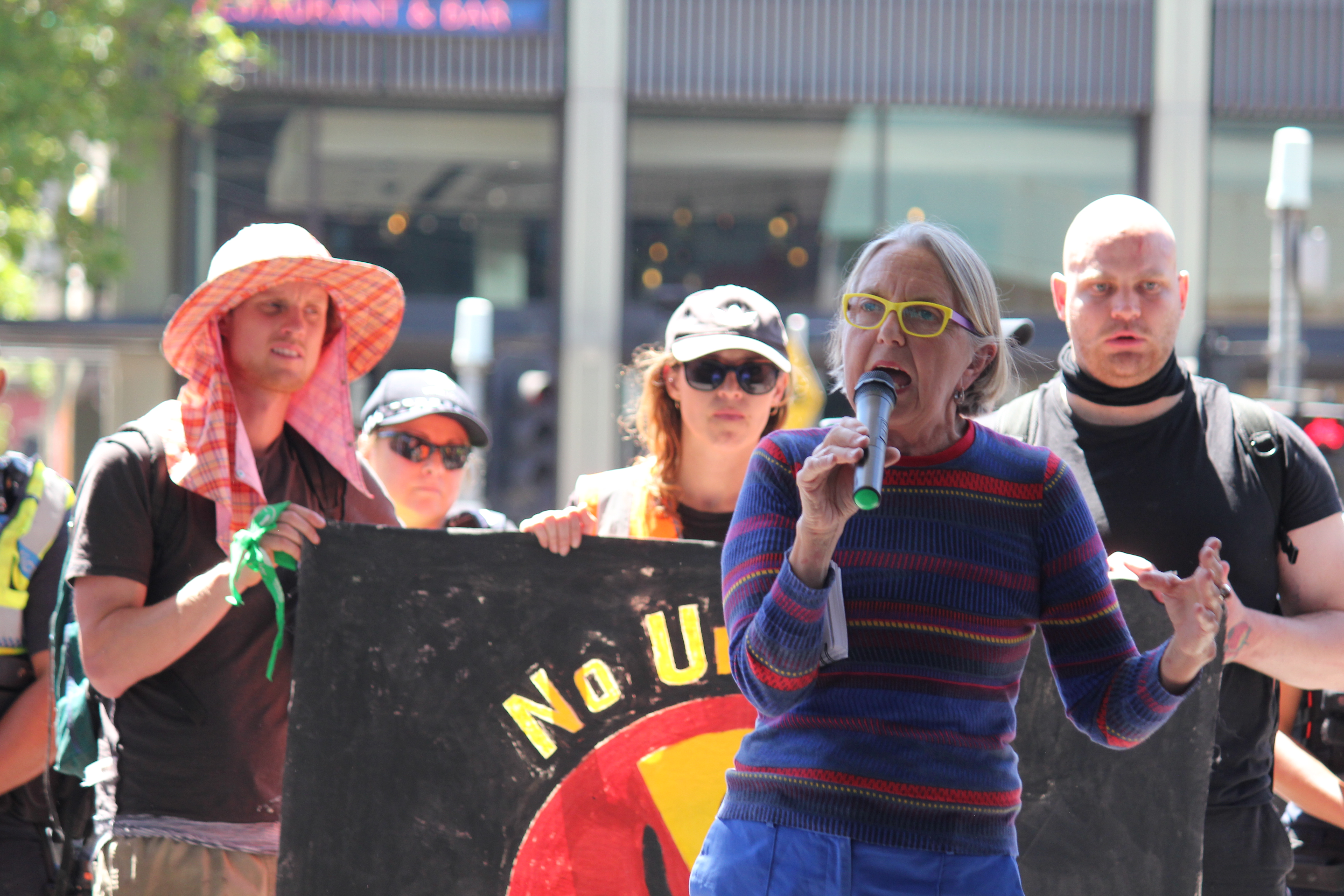 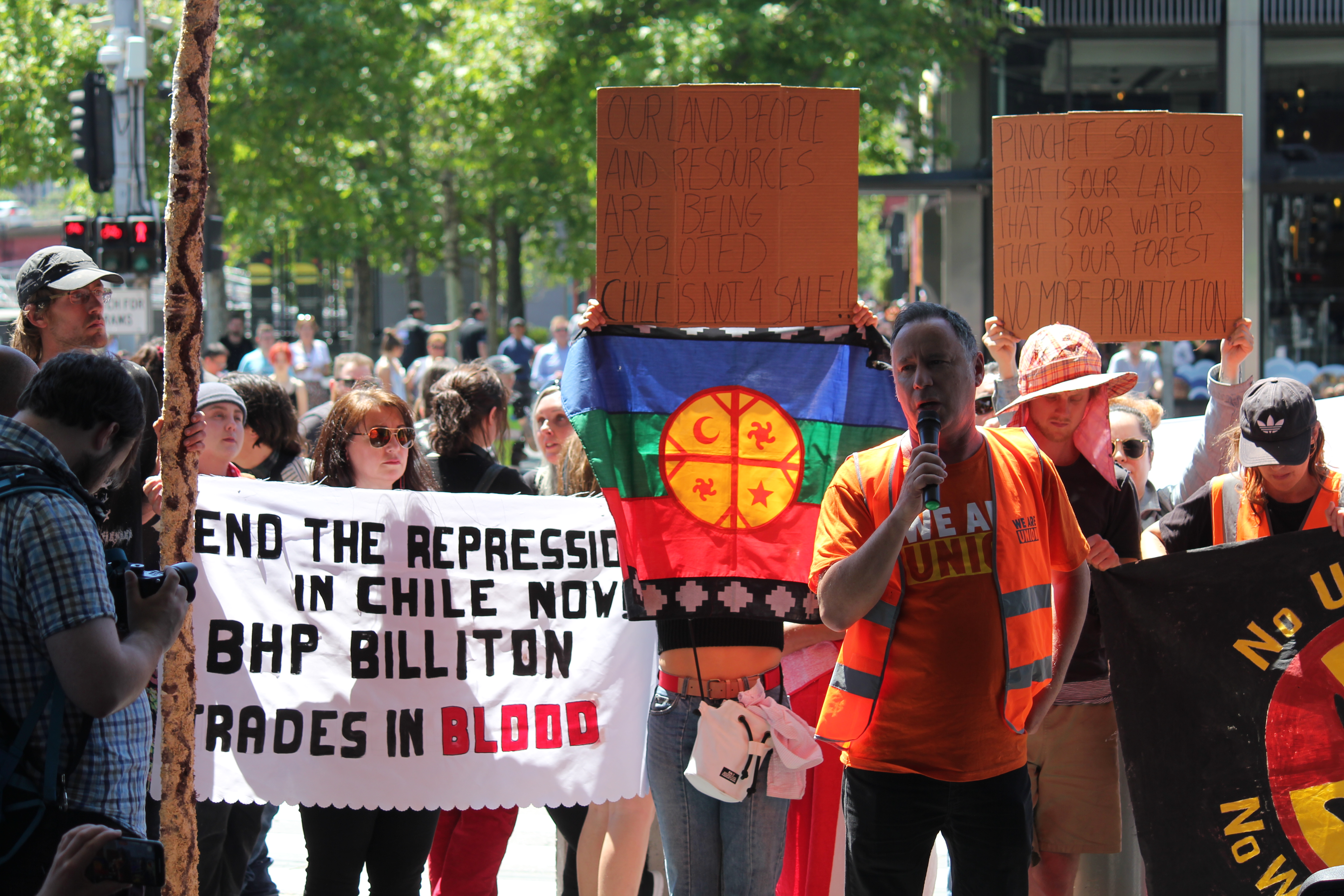 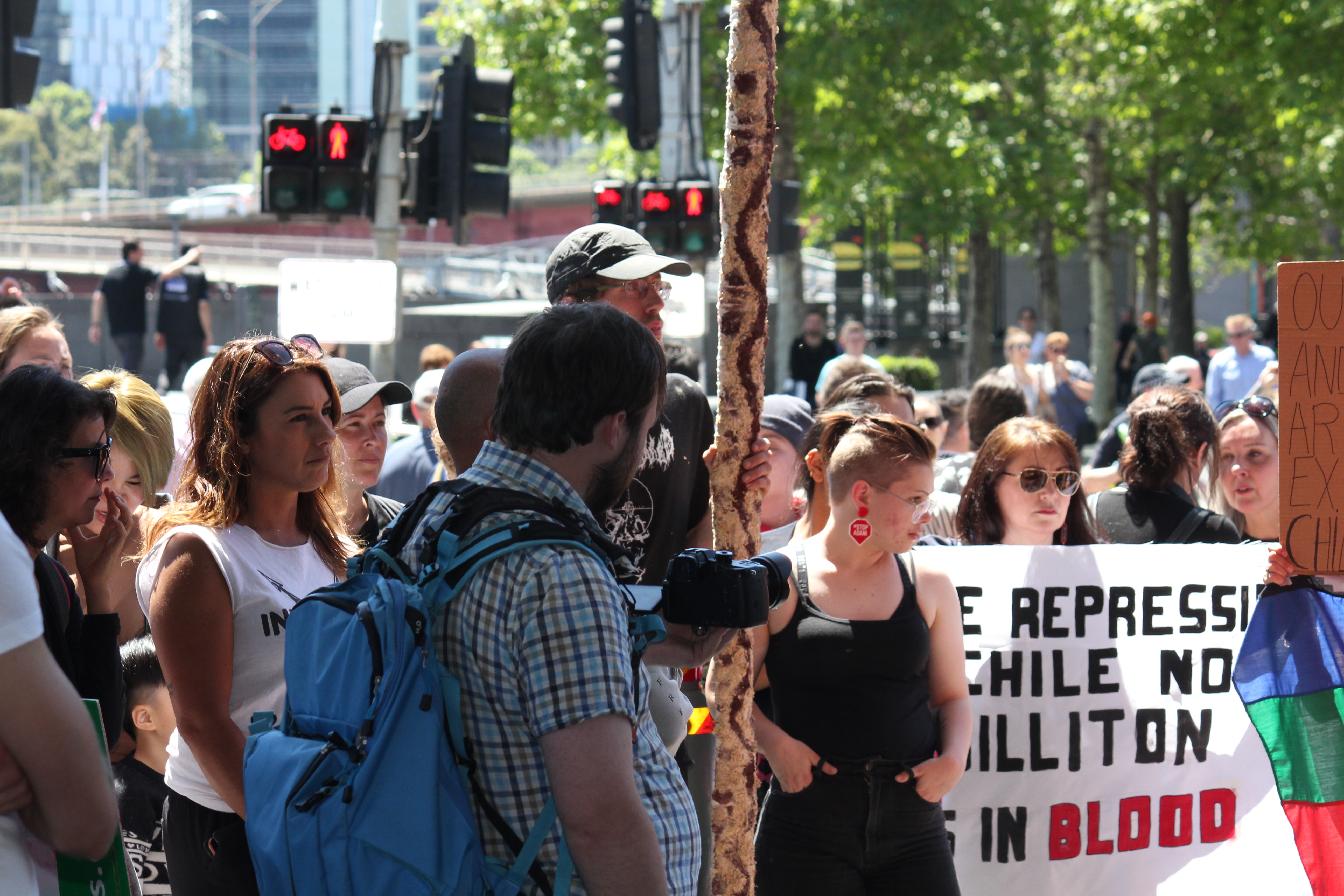 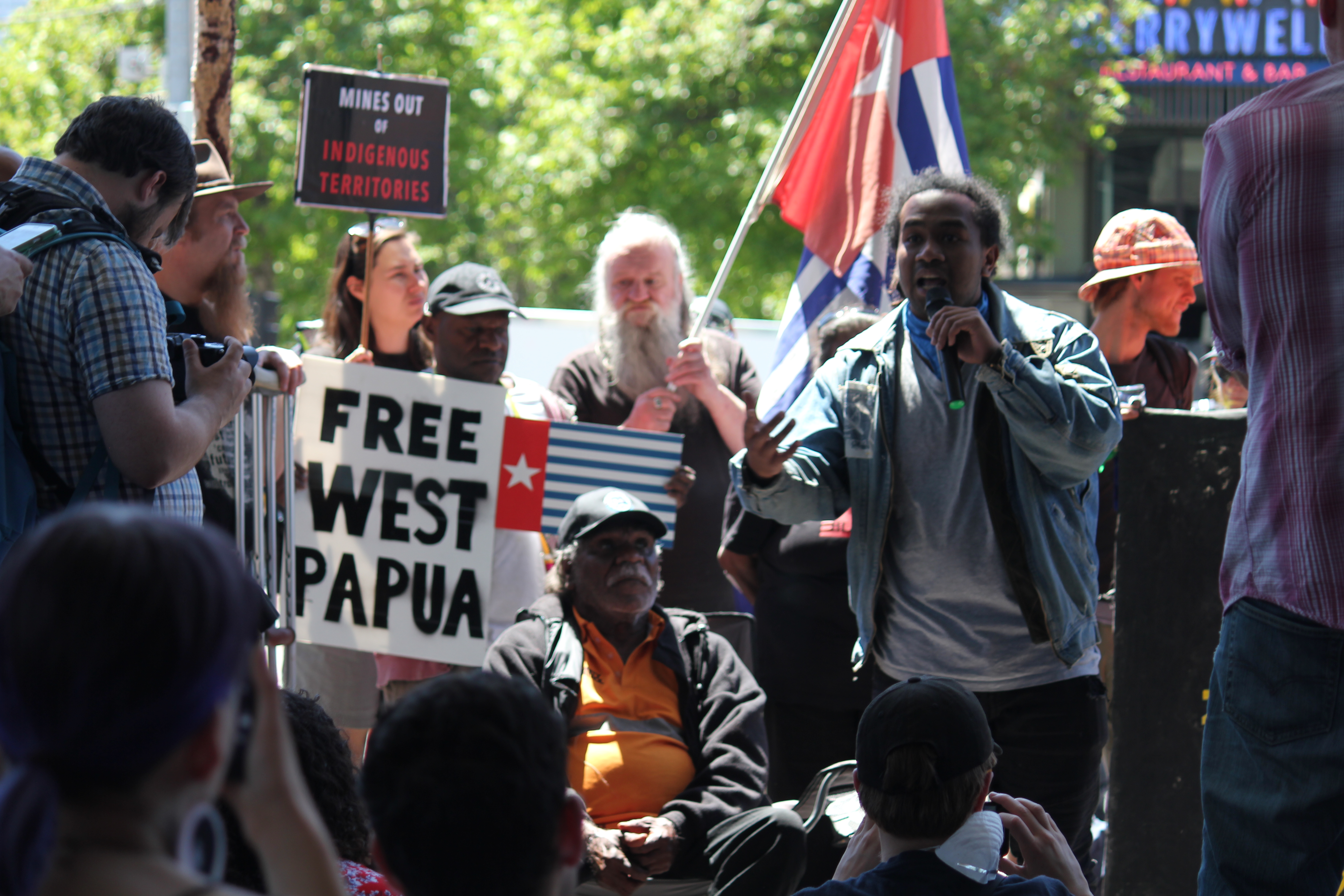 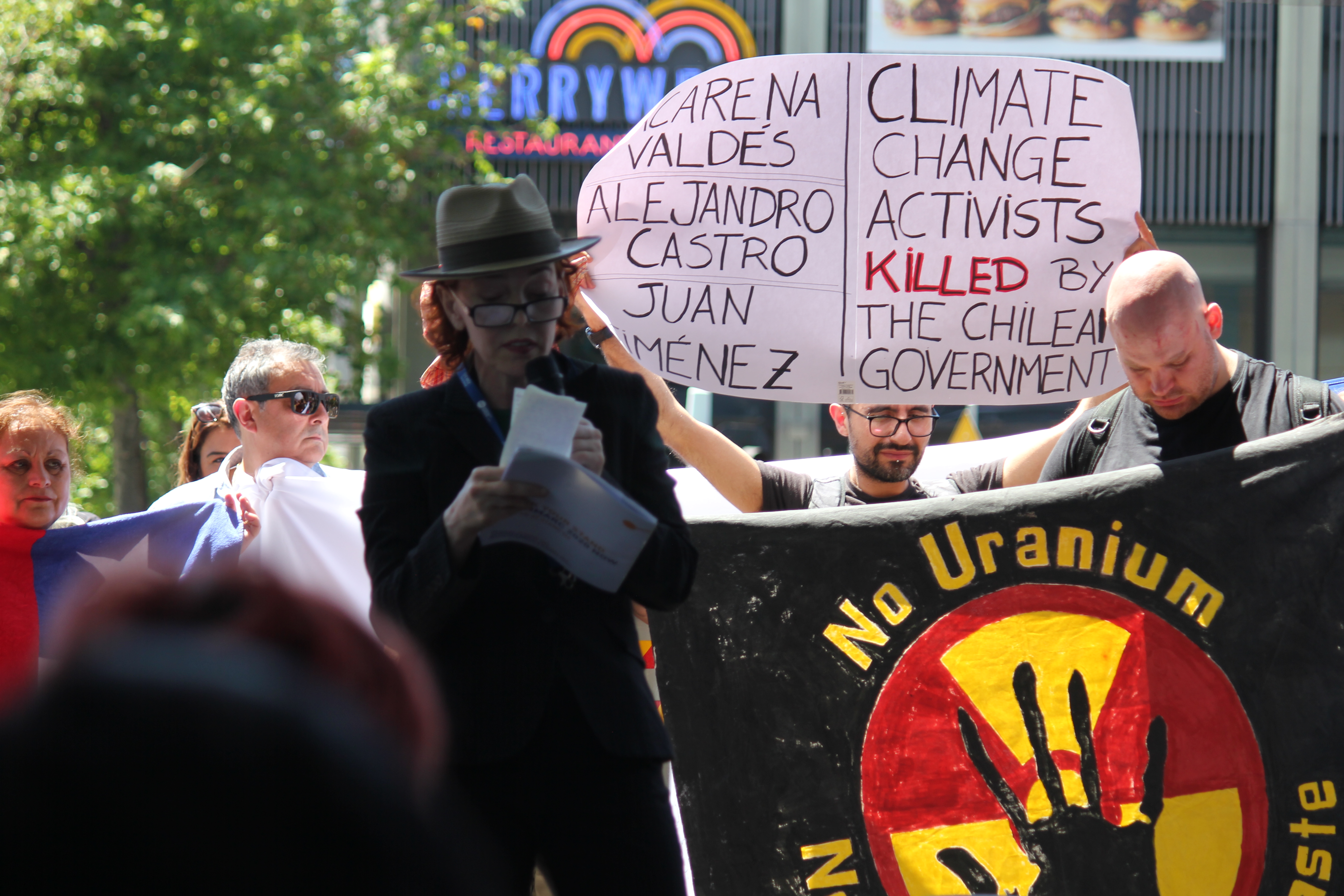 A week of blockades ended peacefully yesterday with more theatrical antics at the International Mining and Resources Conference (IMARC). Protestors dressed up as Gina Rinehart and Scott Morrison espoused the benefits of coal, with “ScoMo” holding up a black lump to illustrate.

The theatre was a softer tone after a week of brutality from the police including on Wednesday, where a number of protestors who had been pepper sprayed, had to lay on the ground, unable to breathe for almost an hour. Ambulances were called but did not arrive, and in the end it was a police medic who assisted them.

“The Rainforest Action Group is shocked but not surprised by the level of violence in Melbourne this week. Mining companies use less visible means of violence across the world every day. Military force and police oppression are habitually used by mining companies to enforce control over communities that resist mining on their land,” says Anthony Amis, a spokesperson for the Rainforest Action Group.  “Indigenous people have been resisting these onslaughts for many decades, mostly beyond the gaze of international media or ENGO’s. Governments are complicit in these purges.”

“In July in Ecuador, more than 10,000 local and international miners were evicted by military personnel on concessions owned by Gina Rinehart, where illegal mining operations were purportedly run by various militia groups – with Colombian, Venezuelan and Mexican crime cartels vying for control. Paramilitaries funded by mining companies are also a major concern in South America, with nearly thirty anti-mining campaigners being killed in Colombia this year alone,” Mr Amis said.

The IMARC Blockade continued at the Australia-Latin America Business Council Dinner on Thursday evening where the Ecuadorian Minster of Mining was one of those Latin American visitors feted by big Australian business. Speakers from Chile, Colombia, Australia and Walpiri elder Uncle Ned Jampijinpa Hargraves shared stories on mining and human rights abuses. Speakers also explained how the recent uprisings in Ecuador and Chile, have in part, been caused by the often unaccountable activities of mining companies.

The Rainforest Action Group was one of about 26 affinity groups who joined Blockade IMARC to draw attention to the mass destruction caused by extractive industries across the globe and the harm they cause to communities and ecosystems. 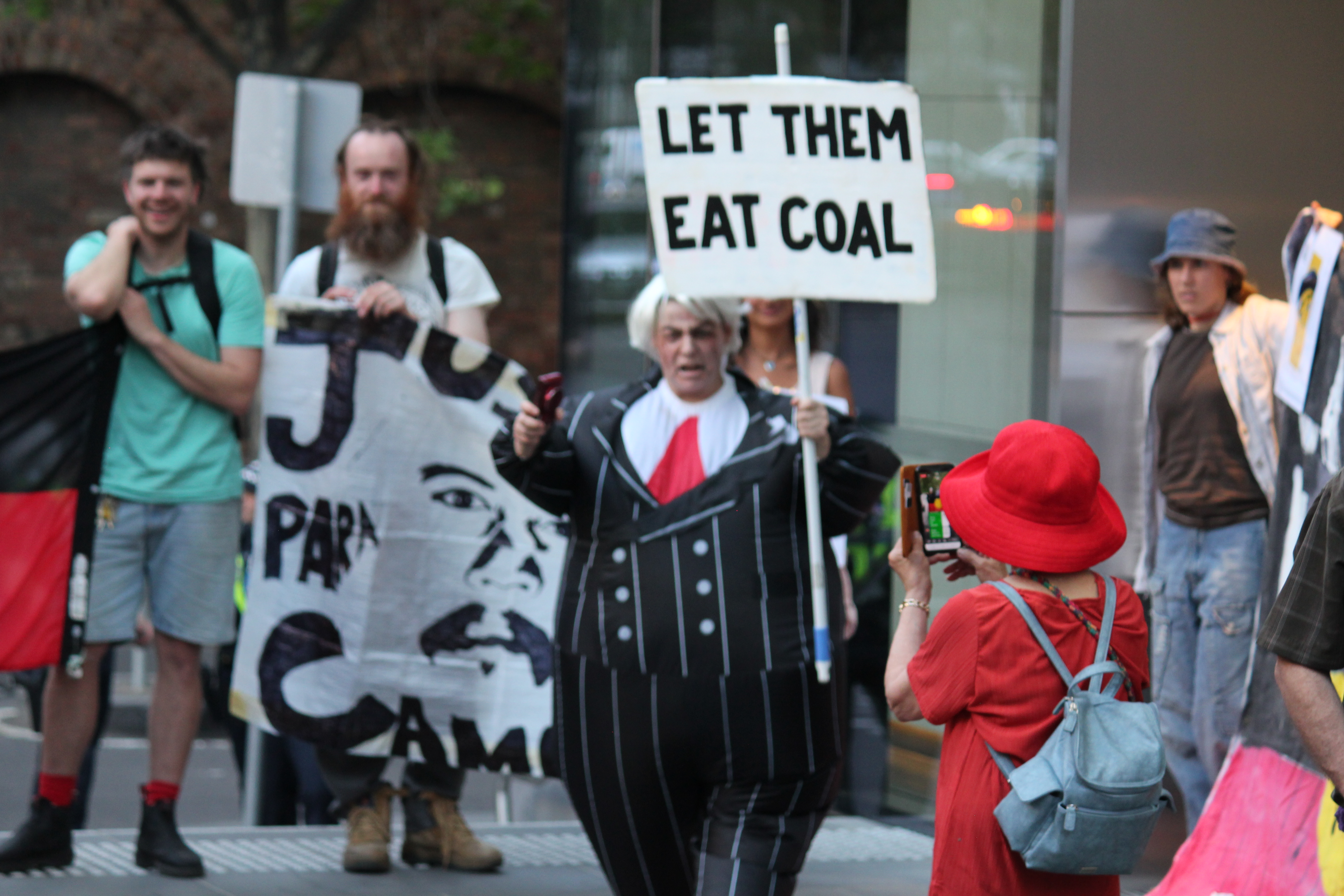 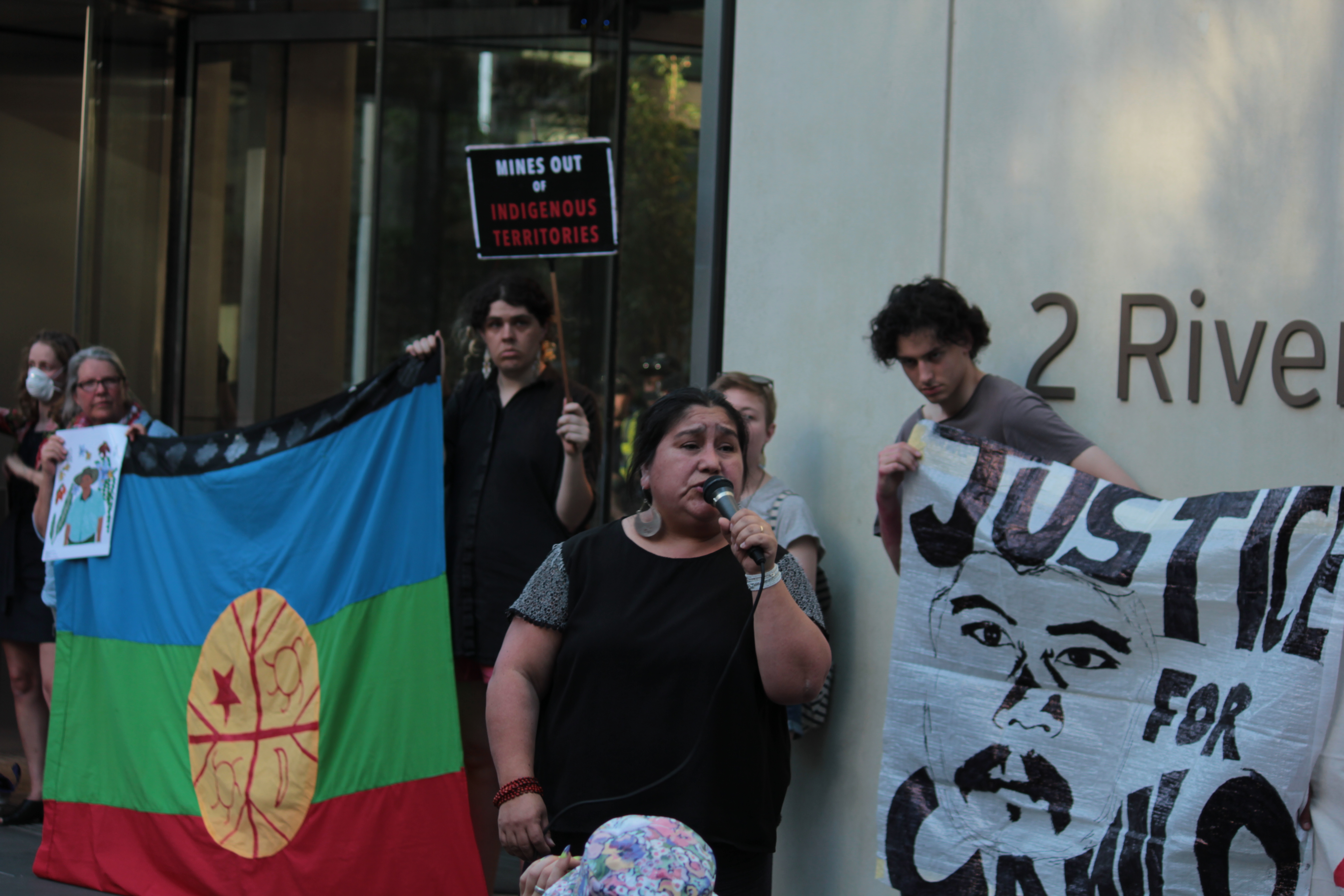 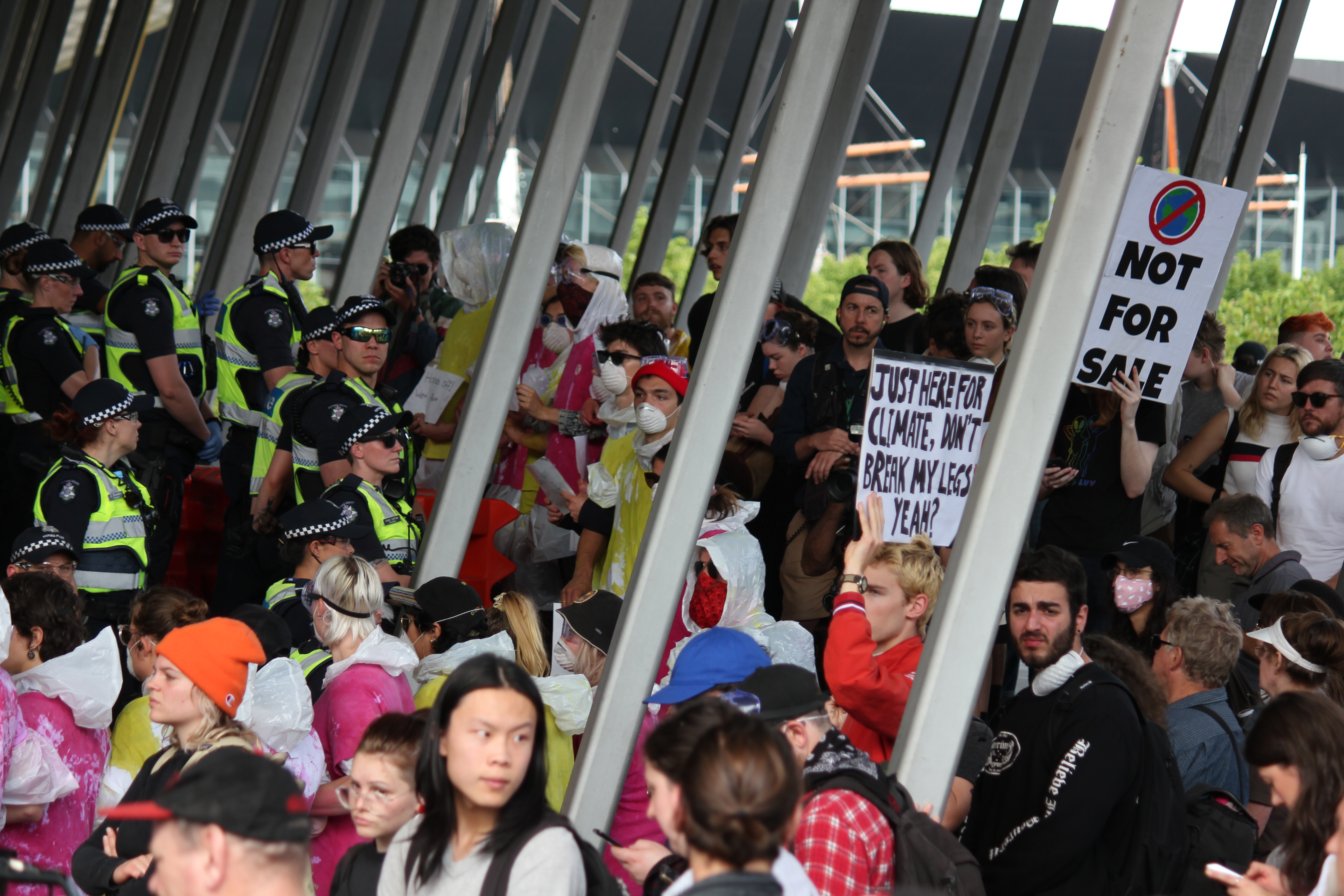 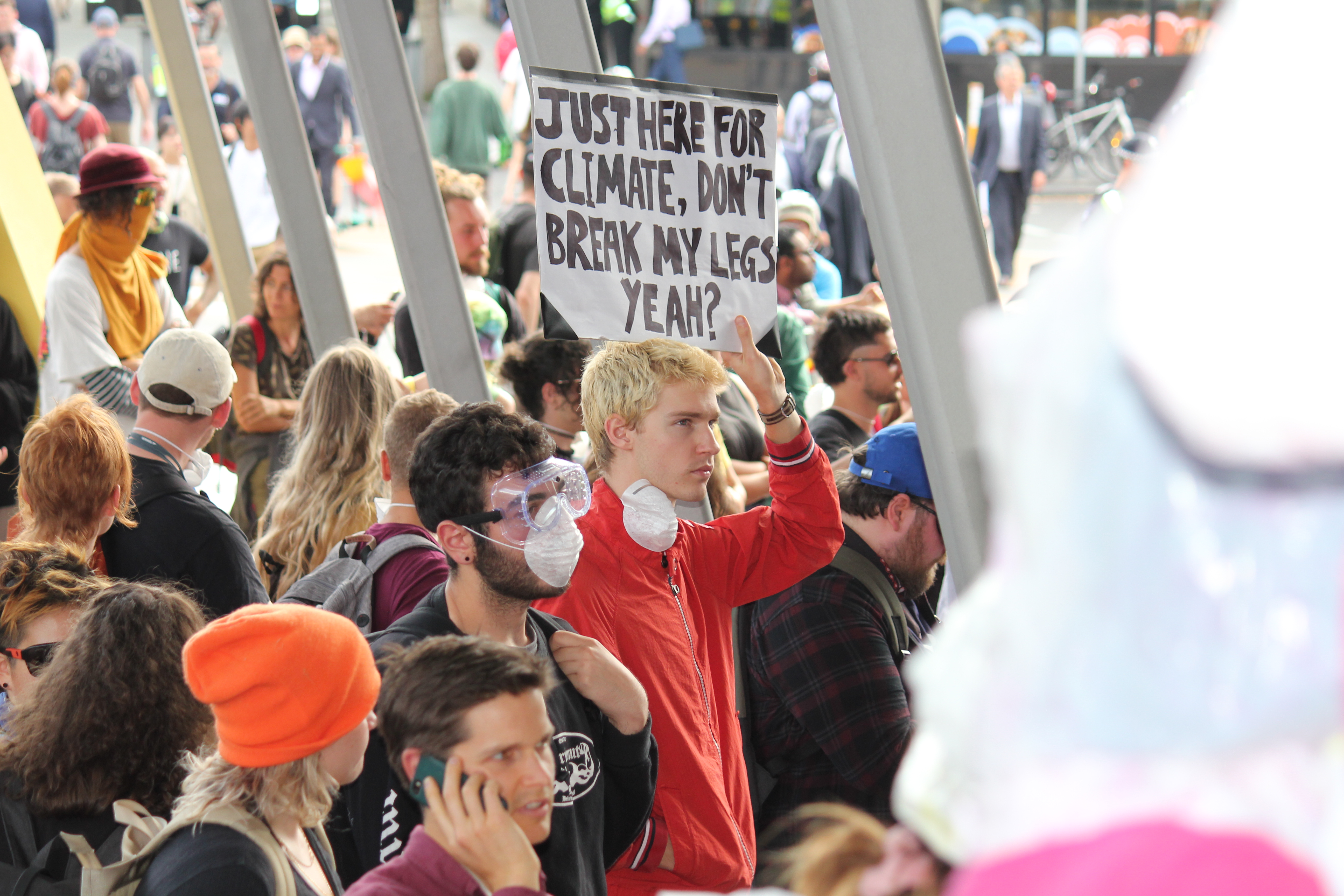 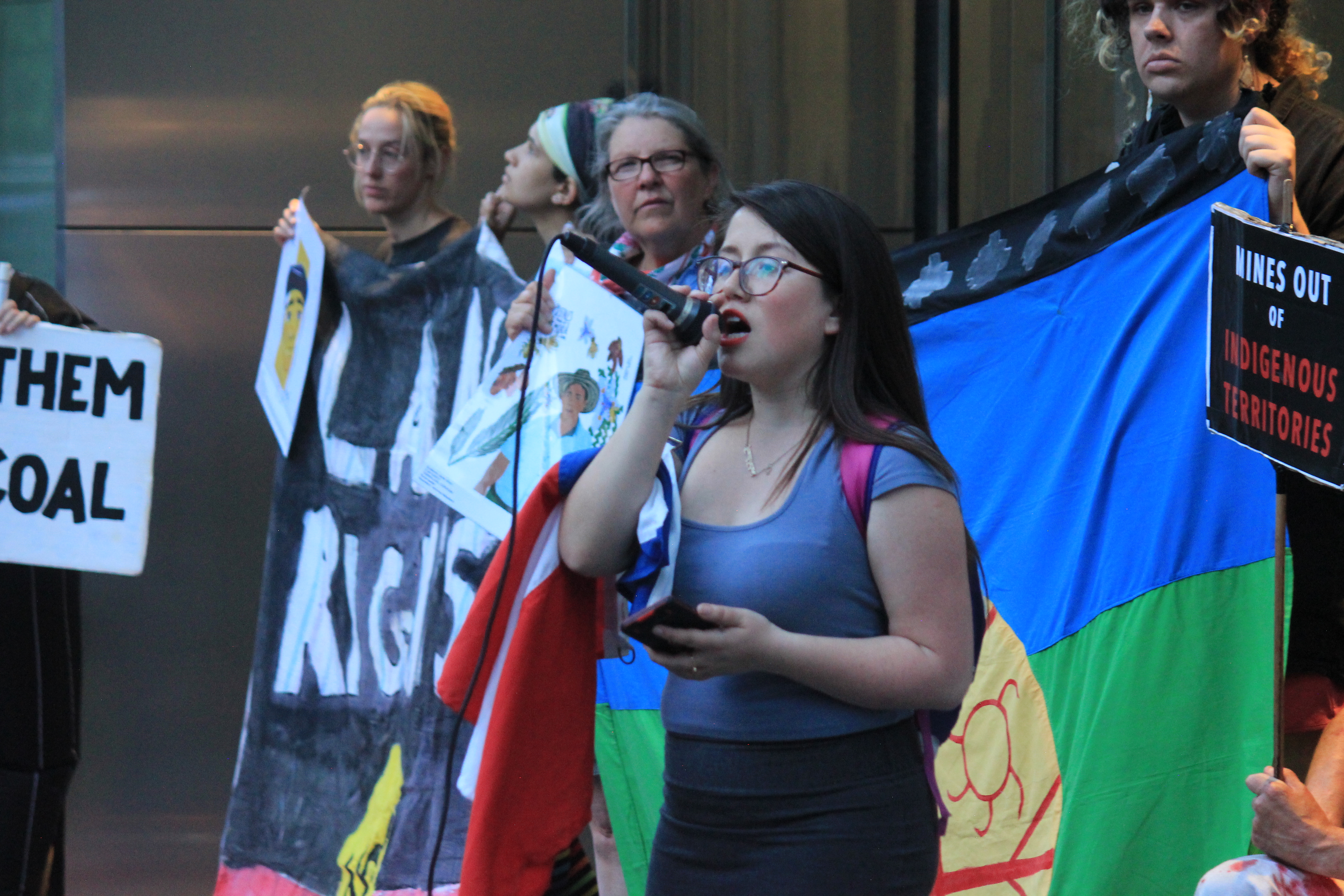 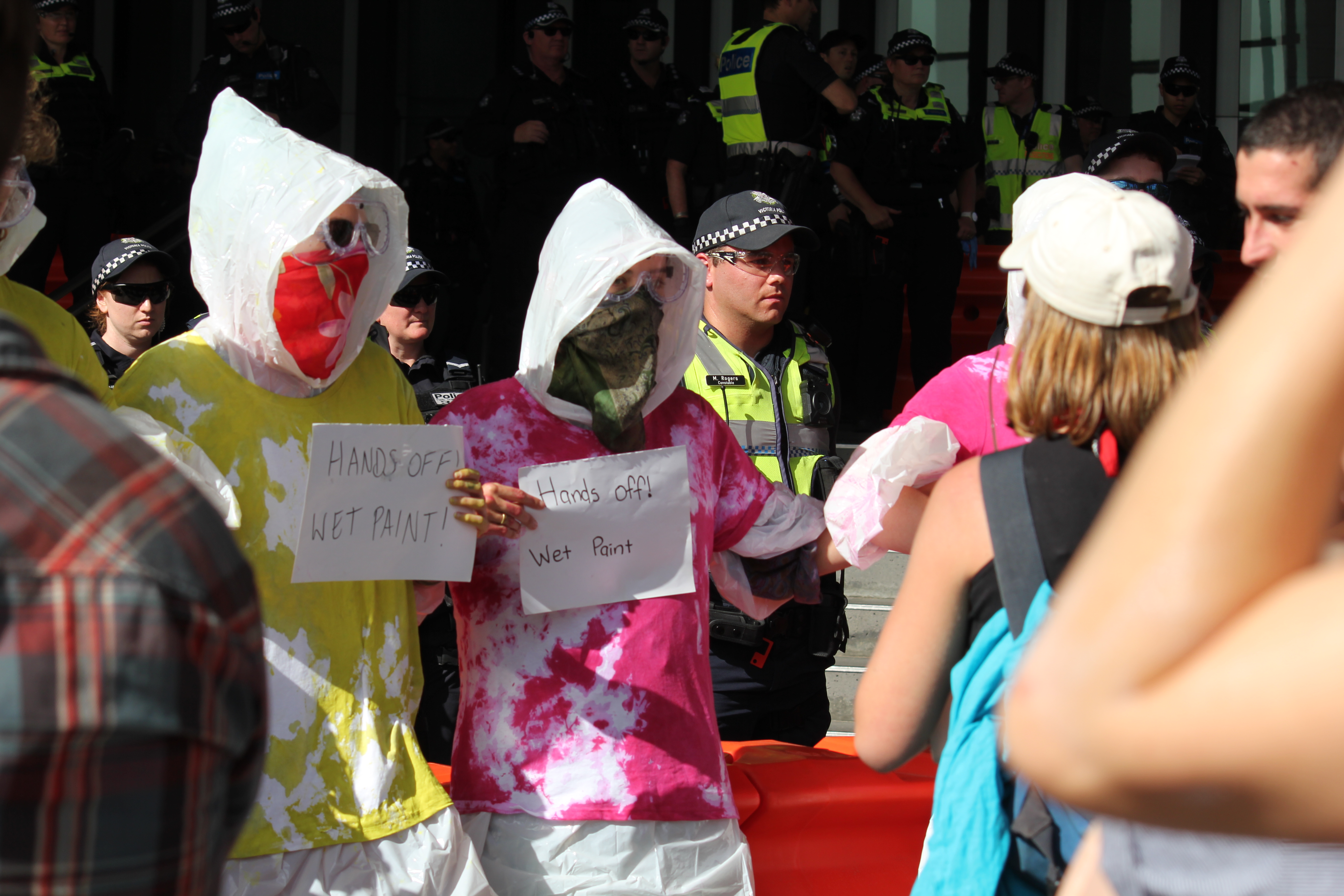