Protest in Ecuador over UNESCO Biosphere Reserve threatened by SolGold, BHP and other miners

Yesterday marked 60 days of protest against mining for people in the Parish of Pacto in Ecuador. In December, the Pacto parish declared an indefinite protest, arguing that mining activity threatens the biodiversity and water sources of the Chocó Andino reserve, home to the endangered Andean Bear.

UNESCO added the Chocó Andino reserve to its list of Biosphere Reserves in 2018. The reserve covers 286,000 hectares of the Chocó Andino, and represents around a third of the Province of Pichincha, of which the parish Pacto is a part. The cloudforest is home to around 350 bird species, hundreds of orchids and bromelias, and 100 species of mammals, including the spectacled bear.

In 2011, the Quito Metropolitan Board declared Pacto’s micro-river basins be protected due to their importance for ecosystems in the area, explicitly prohibiting mining and drilling activities. However, in 2018 a number of mining concessions in the area were handed out.

"The Chocó Andino Reserve is now surrounded by dozens of mining concessions, and illegal mining is encroaching within the reserve. Community organisations say that mining is threatening the water sources of the reserve," says Rebekah Hayden, a writer and researcher for the Rainforest Action Group, an advocay and research group.

"SolGold subsidiary Valle Rico Resources holds several concessions around the Reserve, including two in neighbouring province Esmeraldas. BHP's Sabeleta concessions are just to the north of the Pichincha border, while Ecuador state company ENAMI is exploring on concessions within the Reserve area," says Rebekah Hayden.

"Sources in Pacto tell us that Gina Rinehart’s Ecuador subsidiary Hanrine has put in a bid for two concessions in the Pichincha province – Lorena 2 and 3, which are expected to be accepted once the mining cadaster opens again in April," says Rebekah Hayden.The Reserve includes nine Protected Forests, the Andean Bear Ecological Corridor, three Conservation and Sustainable Use Areas, multiple private reserves and a National Park: the Pululahua Geobotanical Reserve.

In October 2020, the Metropolitan Board passed a resolution to support conservation in the area, but Pacto communities say mining exploration is continuing regardless, and is contaminating the Reserve.

Elcomercio reports conservation groups as saying mining is “not compatible with the biodiversity of the area, nor with the sustainable production that is part of the management plan for these areas. They pointed out the use of dynamite and other explosive materials, the contamination of the water, the fragmentation of the communities, the damage to the landscape”.

On December 18 2020, the Parish of Pacto declared the protest, demanding the departure of the three mining companies operating their concessions in the sector, and calling for greater control of illegal mining activities by authorities.

"Illegal mining has proliferated in Ecuador since the expansion of legal mining concessions, with illegal mining operations increasingly run by armed militia connected to cocaine cartels and ex-FARC dissidents. In January 2020, police uncovered an illegal mining operation in Pacto, which contaminated the area with hazardous wastes, while hydrocarbons, dynamite and materials for mining were seized," says Rebekah Hayden.

"Resistance to mining projects across Ecuador is growing with a popular consultation on February 7 in Cuenca showing 80% of the population wants to prohibit large and medium- scale mining activities in their river water recharge zones," says Rebekah Hayden.

"The consultation is expected to form the basis of a major legal challenge at the Constitutional Court level and could halt the development of mining projects in the region. SolGold project El Cisne 1A is in the Cuenca province," says Rebekah Hayden. 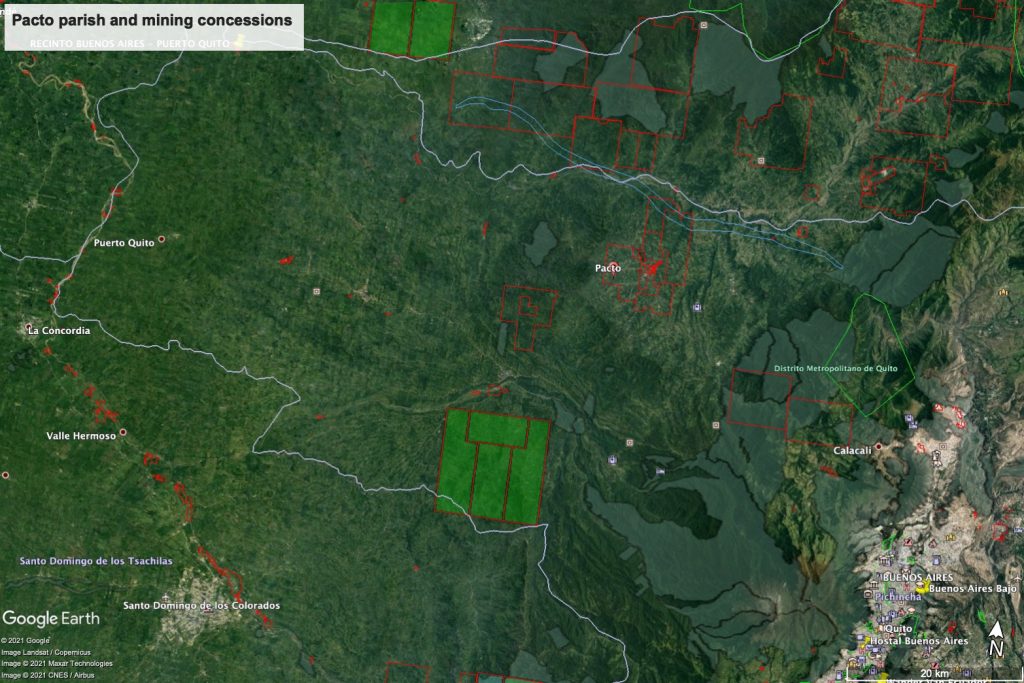