ENAMI and Cornerstone employees continue to be active at the Los Cedros Biological Reserve, cutting trees and damaging forest OMASNE says, despite the Provincial Court of Imbabura ruling on June 19th that the mining project was in violation of the right of Environmental Consultation. Environmental permits were revoked and all mining activity in the area prohibited.

This blatant violation of the law is in keeping with statements by Cornerstone Capital Resources CEO Brooke Macdonald when he stated at the recent shareholder meeting in Toronto, Canada on June 25th: "We will follow the law, but this decision of this lower court in Imbabura is subject to appeal, and we believe that the lower court erred in law and is incorrect… If we lose the appeal then we'll be out of there." [emphasis added]

Ecuadorian organsisation Observatorio Minero Ambiental & Social del Norte de Ecuador (OMASNE) denounced the activities on 10th July, saying the mining companies have “failed to comply with judicial rulings” and that they now “continue to conduct mining exploration illegally in the area of ​​influence of Los Cedros Protective Forest”. [full denunciation by OMASNE below]

OMASNE go on to say that Cornerstone Resources continues to sign agreements with landowners to conduct their exploration efforts in the Los Cedros Protected Forest, and insists that Cornerstone withdraw their activities from the area in accordance with the court's ruling.

MiningWatch Canada states: “This most recent decision is yet another example of the sovereign decisions that communities and courts are making in the country, falling on the deaf ears of the company.”

The judges in the provincial court of Imbabura ruled on June 19 that there had been a violation of mining-impacted communities' right to be consulted, and revoked the previous sentence of November 2018 in which the Action of Protection was discarded. They also forced the Ministry of Environment and Water to publicise the ruling and formally apologise to the impacted communities.

Los Cedros was established in 1988 as a biological and scientific reserve with the help of the Rainforest Information Centre. It consists of 17,000 acres of incredibly rare, premontane wet tropical forest and cloud forest, and numerous critically endangered and vulnerable species, including puma, jaguar and the rare Brown-Headed Spider Monkey. 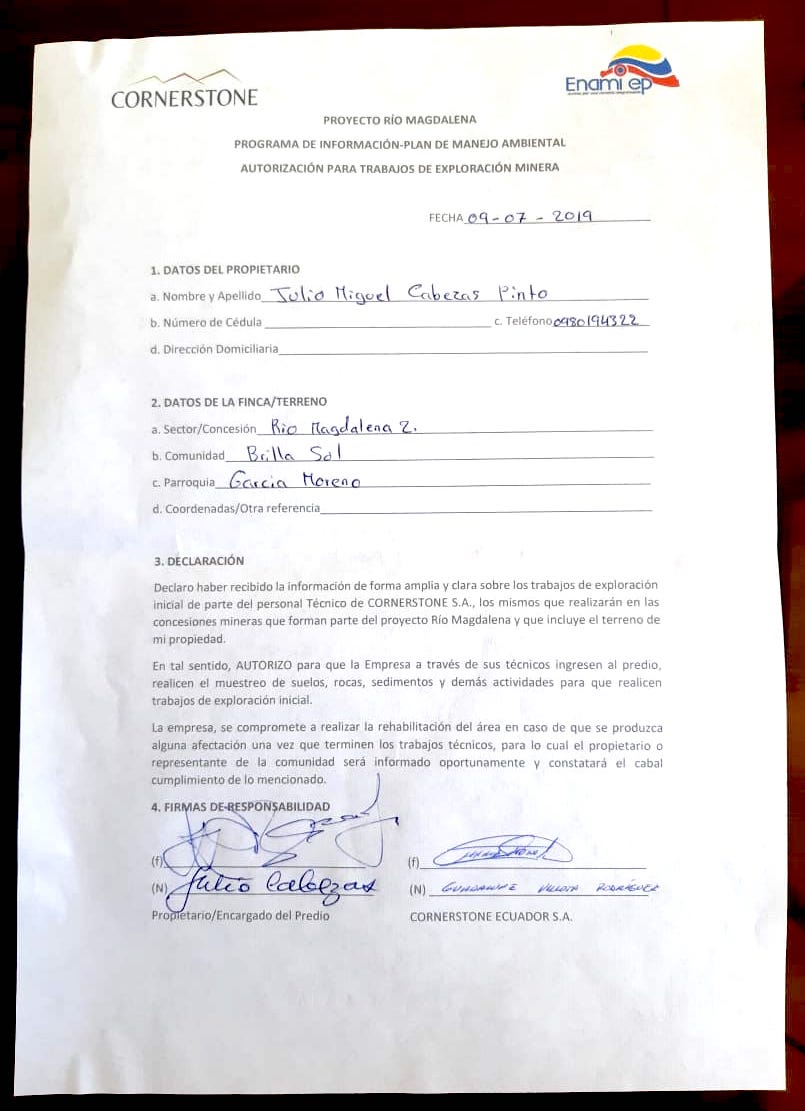 The mining companies #Cornerstone and # ENAMI-EP continue to conduct mining exploration ILLEGALLY in the area of ​​influence of Los Cedros Protective Forest.

Cornerstone and ENAMI-EP attempt to gloss over the violation of the right to environmental consultation, which has already been determined in the ruling by the Provincial Court of Justice of Imbabura on June 19 of this year.

But, at the hands of the Ecuadorian state, for more than a decade mining companies have been deploying an invasive propaganda of "Legal, Responsible Mining"; however, once again mining companies have VIOLATED THE RIGHTS OF THE ECUADORIANS and failed to comply with judicial rulings favorable to the defense of the Water, biodiversity, and the rights of humans and nature in different territories of the country.

The Provincial Court of Justice of Imbabura, in the sentence issued in numerals 2 and 4, clearly indicates the violation of the right of the Environmental Consultation to the communities of the area of ​​influence of the mining project and also that it resolved to withdraw the environmental license to the mining companies for operate:

2.- Declare the violation of the right to participation, established in Article 61, paragraph 4, of the Ecuadorian Constitution, in the guarantee of the environmental consultation established in article 398 ibidem, which should have been carried out to the peoples located in the area of influence of the Magdalena River Mining project, conformed by the Magdalena River 01 concessions (Code: 40000339) and Magdalena River 02 (Code: 40000340), located within the Protected Forest "Los Cedros", Llurimagua sector, García Moreno parish, Cotacachi canton, province of Imbabura.

4.- As a measure of reparation is available, leave without effect the act administrative dispute, consisting of Resolution No. 225741, dated December 12, 2017, in which the Ministry of Environment and Water, granted the environmental registration in favor of the National Mining Company ENAMI EP, to perform the initial exploration phase of the Magdalena River Mining Project, conformed by the Rio Magdalena 01 concessions (Code: 40000339) and Magdalena River 02 (Code: 40000340), located within the Protected Forest "Los Cedros", sector Llurimagua, García Moreno parish, Cotacachi canton, province of Imbabura

What does the Ecuadorian Ministry of the Environment expect? Them to comply with the judgment of the Court?

Where are the state institutions that must regulate the mining activity to bring order and prioritize the Court's decision in which the right of Ecuadorians is given priority?

Are the local and provincial authorities going to pronounce themselves in this respect and govern in favor of the people of Imbabura?

Note: This piece was edited to correct Cornerstone's CEO and where the shareholder meeting took place.