The Ecuadorian government has just implemented a new state mining policy to relax regulations for mining, oil and hydroelectricity, and provide new economic incentives to attract mining investments. This policy will severely weaken the right to prior and informed consultation for affected communities.

"This constitutes a deepening of extractive policy in Ecuador and a violation of individual and collective civil rights, especially the right to previous consultation, as communities have not been consulted regarding the award of concessions in favour of mining companies. The consolidation of the extractivist model will contribute to increased violence towards affected communities, evidencing the continuity of mechanisms aimed at prosecuting, criminalizing and prosecuting people, leaders and social organizations who have been resisting for many years." says a report by CEDHU (Ecuador’s National Human Rights Commission). Read the report here (in Spanish).

The new regulations will result in more protests and resistance by communities, and repression on the part of the government; not to mention widespread and permanent environmental degradation. According to environmental activist Carlos Zorilla, these changes mean "the government will try to severely limit the scope and reach of FPIC for indigenous peoples and environmental consultation for everyone else, by trying to illegitimately regulate it to death".

Over 200 species facing extinction would be impacted if even one gold or copper mine is allowed to go ahead in Intag. These policies would be particularly concerning in areas where communities are already battling mines such as Intag's Llurimagua project, which this year received recent damning reports from the Comptroller’s investigation and the National Ombudsman’s Office; and the Loma Larga mine, another embattled area close to several large Australian concessions. 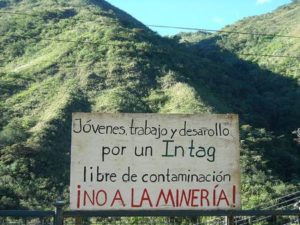 Already 15% of the country has been sold in mining concessions, with 7.5% already having some form of mining activity.

Fernando Benalcázar, Vice Minister of Mining, says that one of the important points of the new mining action base is the promotion of research and development, especially to determine the real potential of 33% of the national territory, where large deposits can be seen that can be exploited in the future. "You can not become a mining power like Canada or Australia without studying and investigating the possibilities that we have. That does not mean that the entire 33% of the territory will be exploited in the future," Benalcázar said.

"In the previous government, basic guidelines were developed for the period 2016-2020, under the context that Ecuador was considered a potential investment destination. But since 2018, we went from potential to consolidation as a formal investment destination. Now the large mining companies worldwide are already investing in the country and it is important to have a consistent policy," he said.

Ecuador's new loan with the International Monetary Fund (IMF) has been a key impetus behind changes to the mining policy.

On April 24, 2019, President Lenín Moreno ordered the issuing of a new State Mining Policy through Executive Decree 722, which has six axes: sectoral planning, investments, prior and popular consultation, efficient and sustainable management, combat to illegal mining and tax benefits. These axes fundamentally seek greater articulation among Ministries, foreign investors and sectors of civil society, while increasing investment with tax benefits such as tax exemptions and elimination of others, making the rules for granting of permits and environmental licenses more flexible, and regulating free, prior and informed consent. The Government has also included the Fruta del Norte and Mirador mining projects, located in Zamora Chinchipe and Loma Larga in Azuay respectively, in its mining investments plan that forms part of the new International Monetary Fund (IMF) Agreement.

This new Executive Decree is part of changes at a level of law known as 'organic law' (código orgánico), one step higher than common law and one step lower than constitutional law. Such laws cannot over-ride the constitutional laws regarding previous consultation, environmental protection, citizen rights, or the rights of nature. So if a case reaches the constitutional court, the Ecuadorian Government has a high chance of losing. The government may be hedging its bets on the premise that most grassroots land protection cases will lose and run out of funds for appeals long before they ever get to the Supreme Court level.

CEDHU states that "the new announcement to regulate the consultations by decree is illegal; because it aims to regulate a constitutional right, violating the principle of reservation of law, and because it is a clear contradiction to judicial decisions and voices of regional populations who have demanded an end to extractive activities".

"According to research conducted by Martín Zorrilla et al (2018), our country has the greatest biodiversity in the world. The threat of extinction for part of this biodiversity has increased dramatically since April 2016, when the Government opened around 13% of the country to mining exploration, with many concessions covering previously protected forests. Given that more than 30% of the total area designated as Protected Forests (Bosques Protectores) is included in the new exploratory mining concessions, forest area will be significantly reduced if exploration or exploitation occurs. Most concessions are located in the hyper-diverse zone of forests and water sources."
CEDHU press release, May 2019

What can we do?

Taking cases to the constitutional courts, either singly or as a class action, will be a key part of this resistance. International activists can support the grassroots fight in Ecuador through an ongoing legal fund for Ecuadorian front line communities.

The Rainforest Action Group is working to create and support this legal fund. At present, we are continuing to take donations via the Rainforest Information Centre’s Ecuador Endangered crowdfund, which has sent around $20,000 to Ecuador since the campaign was started in 2017.

DONATE TO THE LEGAL FUND HERE