Communities barricaded a bridge in Chical, close to the Colombian border, on January 17 to express their frustration with mining companies continuing to explore despite community opposition. The event took place around 5 kilometres from SolGold’s Chical concessions, where they announced significant deposits last year.

“The blockade was the latest in a series of measures by El Pablo community members to protest ongoing exploration attempts by SolGold subsidiary Carnegie Ridge Resources and ENAMI (part-owned by Canadian company Cornerstone Resources). ENAMI’s Espejo concessions cover more than 90% of the Cerro Golondrinas Protective Forest which forms the headwaters of five rivers,” says Ms Rebekah Hayden, a member of the Rainforest Action Group – a group investigating the actions of Australian mining companies in Ecuador.

SolGold has a cluster of concessions in northern Ecuador that overlap or border on territory held by the Indigenous Awá Federation. Indigenous territories have added protections in Constitutional law to protect them from mineral and oil extraction.

“The Awá Federation has consistently held a united front against mining since 2016, resolving to ban all mining on Awá lands, and demanding absolute transparency about the concessions. Despite 6% of their territory being covered with mining concessions (down from an initial 40% in 2017), they claim there has been a complete lack of consultation or information on the progress of the projects,” Ms Rebekah Hayden says.

The Awá’s anti-mining stance was reiterated with a formal statement on mining at an assembly of 450 people on January 19-21, and president of the Federation of Awá Centros of Ecuador Jairo Cantincus was re-elected, a sure sign that the Federation will continue to fight against mining.

“SolGold started exploration on its Chical concession despite a lack of consultation with the community, and powerful community resistance. Exploring without their full and informed consent is against their Constitutional rights, and could be contested in court,” Ms Rebekah Hayden says.

When Roberto Taicús, president of the Awá community El Baboso went to speak to SolGold at a meeting in September 2019, they denied the community was affected by their concessions, despite maps showing it to be the case.

“On other SolGold concessions, El Cielito leaders have said that SolGold has divided its inhabitants and blocked the roads to their farms. The Santa Cecilia community in SolGold’s flagship Cascabel concession, is also under threat, with Solgold buying up land en masse, and forcing community members out,” Ms Rebekah Hayden says. [read more on this here]

Roberto Taicús was quoted by Ecuadorian journal PlanV saying community members, “have become stripped of their own territories”.

“The Awá Federation has repeatedly sought information on mining projects, but Solgold only refers them to the Government, who refuses to give them any details. The Awá are currently conducting baseline water studies to determine contamination from exploration and mining,” says Ms Rebekah Hayden.

“All this comes at a time when the homicide rate in Ecuador has soared, with InsightCrime stating it has grown by a faster rate than crime capitals such as El Salvador, Venezuela and Brazil. This is the case particularly near the border with Colombia, where criminal groups and ex-FARC rebels compete to move cocaine along Ecuador’s ‘cocaine superhighway’. This area is only 20 kms from Solgold’s Cascabel concession,” says Ms Rebekah Hayden.

“Illegal and legal miners have inundated the region, threatening townspeople and attempting to bribe leaders. The Ecuadorian army was sent in to the area to secure the area, after miners were moved on from their illegal occupation at Gina Rinehart’s Imba2 concession in July. The Awá have already seen how illegal mining has affected Awá tribes in Colombia, polluting rivers and destabilising social groups, and they do not want to see the same thing happening to their communities in Ecuador,” says Ms Rebekah Hayden.

“It seems unfathomable that SolGold is continuing to explore in a region so powerfully anti-mining, and against Ecuadorian law and OECD requirements that they conduct consultation with affected communities. Additionally, attempting to build a mine in a region where organised crime and homicide rates are soaring does not sound like good business practice,” Ms Rebekah Hayden says.

“With InsightCrime stating that this might be the early stages of a sustained increase to Ecuador’s murder rate, the Rainforest Action Group is concerned that SolGold’s efforts to establish a mine in the region will only amplify the unrest further,” Ms Rebekah Hayden says. 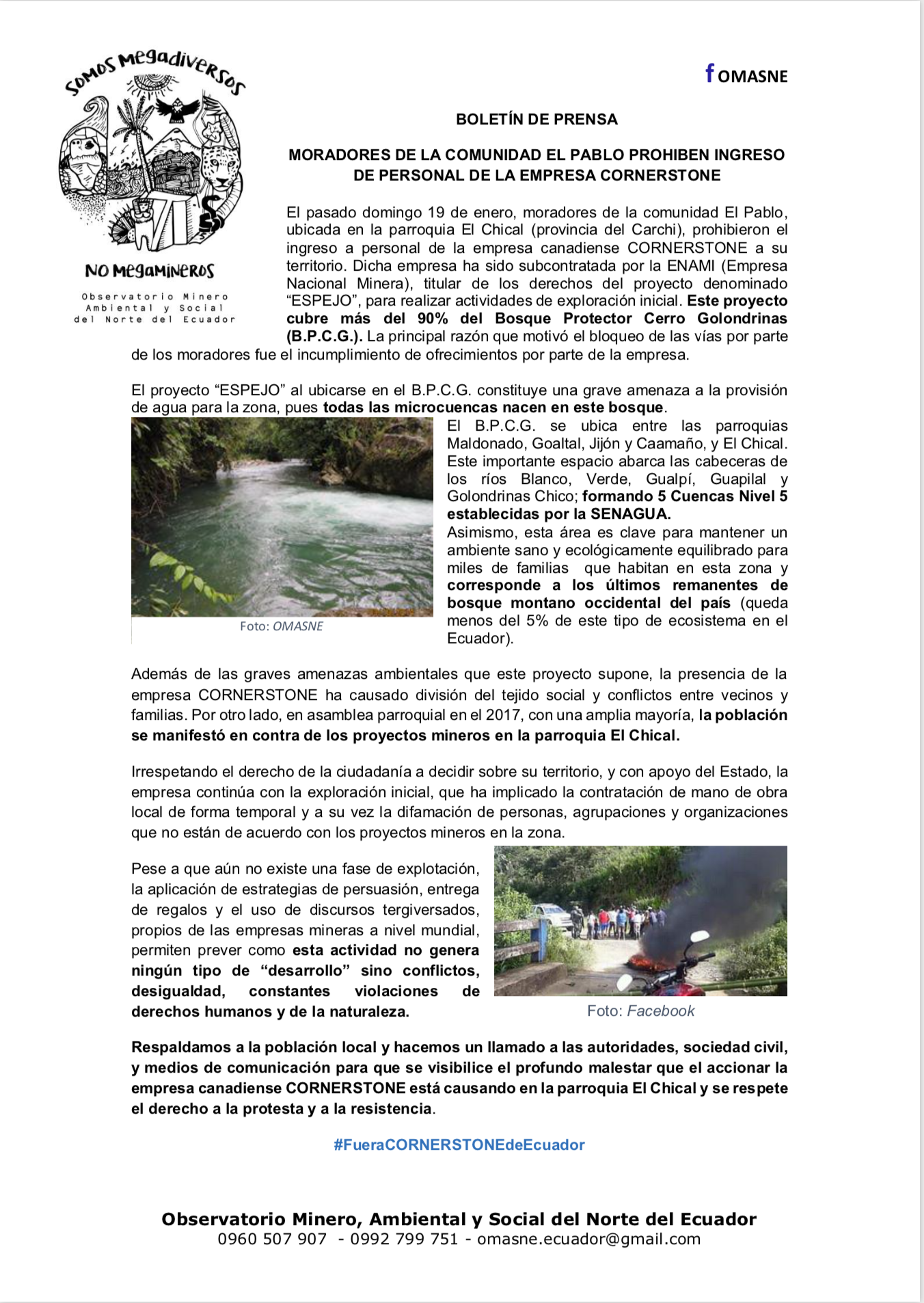