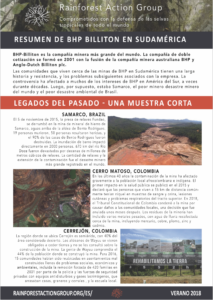 Melbourne Rainforest Action Group (MRAG) today released a report detailing the activities of BHP Billiton in South America. The report highlights the company’s poor environmental and social record in a number of locations.

Of particular concern is that BHP is now promoting itself as being environmentally responsible by promoting the use of its mining materials, particularly copper in electric cars.

“MRAG has particular concerns about BHP’s intended entry into Ecuador, a country with minimal experiences in dealing with mining companies. BHP has recently purchased a stake in exploration company Solgold who hope to develop the Cascabel mine in the north of Ecuador. The copper at Cascabel is being promoted under the guise that it will be required for electric cars, yet the bulk of world’s copper demand is predicted to go into energy infrastructure, not electric cars” said spokesperson Anthony Amis.

BHP has also been alarming people because of their exploration activities in the Intag Valley Ecuador, a region where the company has mining concessions.

MRAG has documented a litany of environmental problems caused by BHP operations across South America, including the infamous 2015 Samarco mine disaster in Brazil which killed 19 people.

Perhaps of even greater concern is BHP’s history in Colombia, particularly at its coal mine at Cerrejon and its divested Cerro Matoso nickel mine. Both operations have had devastating effects on people living the near mine sites. Horrific violence has been inflicted against community members in both regions, with 30 leaders have killed near Cerro Matoso. How has BHP managed to operate in these locations with little difficulty when armed groups operate in these regions?

The Colombian problem also now appears to be spilling over into Ecuador. A director of the Australian mining company operating on the border, Rio Dorado was quoted in the Sydney Morning Herald on December 7, “well, if we have anybody enter the site what we should be doing is shooting and asking questions after the event,”

“The Colombian/Ecuadorian border is classified by the Australian Department of Foreign Affairs as a Do Not Travel Zone due to the very high level of risk, yet the Cascabel mine site is only 10km away from this zone, and anything transported from the mine will have to travel 30-40km through the no go zone. Why would you want to build a mine in or near this region, unless you were sure that you could pay for protection your asset” Mr Amis concluded.